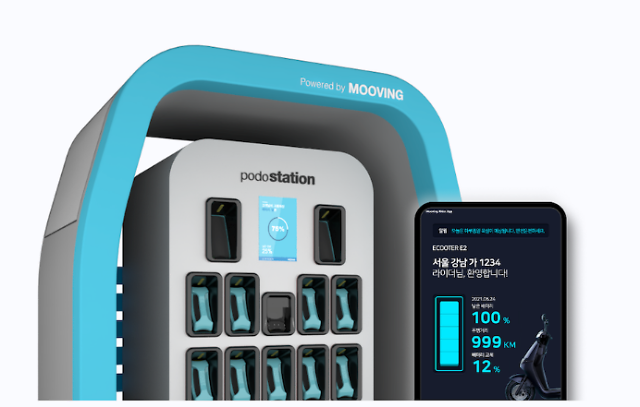 Many consumers chose to deliver food instead of visiting crowded restaurants in 2020 when the first wave of a coronavirus pandemic swept across South Korea. According to the Fair Trade Commission, a state trade watchdog, South Korea's food delivery service market was estimated at 23 trillion won ($20.7 billion) in 2020, up sharply from 15 trillion won in 2017.

Mooving said in a statement on January 19 that the company signed an agreement with Korea Seven, the operator of 7-Eleven stores, to provide battery swapping stations (BSSs). The charging system will be operated at two 7-Eleven convenience stores in April 2022. After a test run, the number of charging stations will be gradually increased so that consumers can swap or charge battery modules.

"Hopefully, we can speed up the distribution of eco-friendly mobility services by popularizing our shared battery charging system using 7-Eleven's distribution network," Mooving CEO Lee Sang-myung was quoted as saying.

Various South Korean companies have focused on the adoption of electric motorcycles. KT Linkus, a battery-sharing mobility platform operator wing of South Korea's telecom company KT, is transforming old phone booths into electric motorcycle battery charging stations in Seoul and other cities.
© Aju Business Daily & www.ajunews.com Copyright: All materials on this site may not be reproduced, distributed, transmitted, displayed, published or broadcast without the authorization from the Aju News Corporation.