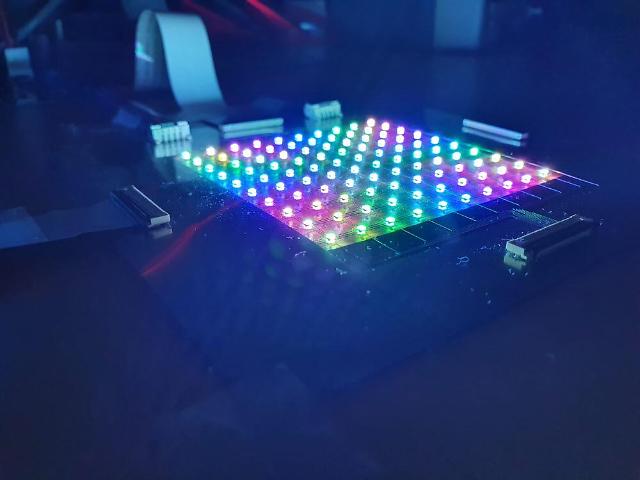 Active matrix is a type of addressing scheme used in flat panel displays. In switching individual elements, each pixel is attached to a transistor and capacitor actively maintaining the pixel state while other pixels are being addressed, in contrast with the older passive matrix technology in which each pixel must maintain its state passively, without being driven by circuitry.

The application of active-matrix technology to transparent light-emitting diode (LED) electronic boards can be extended to various areas as it is effective in reducing power consumption and improving image quality, according to the Korea Photonics Technology Institute (KOPTI), a research institute specialized in the field of photonics technology.

Transparent light-emitting diode displays turn pixels in the line sequentially because they have to visually hide opaque wires on the screen. Pixels flash periodically, causing blinking and shimmering that can be solved with the quick supply of high current. There is also a technical limitation in increasing the size of displays and pixel density.

"With the advent of mini LED and micro-LED technologies, demand for various high-resolution transparent electronic displays increases, but due to the lack of development technology at home, it is highly dependent on imports," said Kim Jung-hyun, a senior researcher in charge of KOPTI's micro-LED display research center. "We hope that the technology developed this time will serve as an opportunity to raise the competitiveness of domestic LED displays to the next level."

MicroLED is an emerging technology that uses microscopic LEDs. Compared to OLED displays, microLED displays have higher brightness and a wider range of colors. Also, the new LED technology does not have luminance decay issues commonly found on OLED displays.