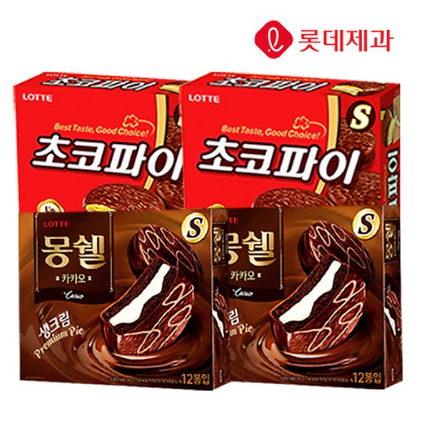 SEOUL -- Lotte Confectionary, a confectionary wing of South Korea's conglomerate Lotte, will mesmerize "Russkis" with a premium cream-filled chocolate cake snack called "Mon Cher," taking advantage of the never-cooling popularity of Choco Pie, a chocolate-covered snack cake with marshmallow filling, which is enjoyed by the almost entire population of 144 million.

Choco Pie and Mon Cher are both palm-sized, round-shaped chocolate cakes. While Choco Pie is filled with chewy marshmallows, Mon Cher is an upgraded version of Choco Pie consisting of white cream which makes it taste like a real cake. Choco Pie is also popular in China, Vietnam and many other countries.

In Russia, Lotte Confectionary earned about 50 billion won ($42 million) in annual sales in 2021 by running its factory in Obninsk, some 100 kilometers (62 miles) southwest of Moscow, to its maximum. About 34 billion won has been spent on boosting the production of its Russian plant.

The localized version of Mon Cher will make its debut in Russia in the first half of 2022, Lotte Confectionery said in a statement on January 20. Mon Cher has gradually gained popularity abroad, but it is not sure whether it can capture the hearts of Russian consumers as much as Choco Pie.

Four types of Choco Pie are in the market -- banana, strawberry, cacao and original marshmallow. In January 2022, Lotte Confectionery advertised Choco Pie through some 10 television channels in Moscow and Saint Petersburg. Pyongyang has built a bootleg Choco Pie factory. A former North Korean soldier who escaped to South Korea in 2017 with severe gunshot wounds made headlines for saying he wants to eat Choco Pies when he recovered his senses after the long emergency surgery.
© Aju Business Daily & www.ajunews.com Copyright: All materials on this site may not be reproduced, distributed, transmitted, displayed, published or broadcast without the authorization from the Aju News Corporation.