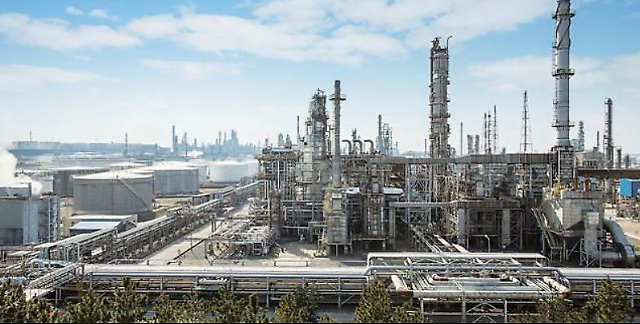 SEOUL -- Hyundai Oilbank, a petroleum and refinery company affiliated with South Korea's Hyundai shipbuilding group, has signed a business agreement with Aramco on the utilization and long-term supply of ammonia from Saudi Arabia.

Ammonia, which is a compound of nitrogen and hydrogen, contains no carbon but it needs pilot fuel for combustion. Ammonia is seen as an ideal resource to establish an eco-friendly hydrogen fuel cell-based infrastructure. It is also seen as a suitable ship fuel due to its stability in supply and relatively easy storage and transportation.

Hyundai Oilbank said it has signed a memorandum of understanding with Aramco to investigate the feasibility of using ammonia and discover opportunities for the long-term supply of ammonia from Saudi Arabia.

"Hyundai Oilbank is already building its own blue hydrogen system that collects and utilizes carbon generated in the hydrogen manufacturing process," Hyundai Oilbank CEO Chu Young-min said in a statement on January 21. "The introduction of ammonia will also contribute to the expansion of the global low-carbon fuel ecosystem."

As part of a broad roadmap unveiled by its parent group to establish a hydrogen value chain by 2030, Hyundai Oilbank will produce blue hydrogen and use it for desulfurization facilities or sell it as fuel for vehicles and power generation. Blue hydrogen is produced by applying carbon capture and storage to reduce carbon emissions.

Aramco is the second-largest shareholder of Hyundai Oilbank. Under a deal in March 2021, the refiner will import Aramco's liquefied petroleum gas to produce blue hydrogen, which is derived from natural gas with carbon capture technology. Hyundai Oilbank will receive blue ammonia from Aramco and use it as fuel for liquefied natural gas boilers.

In November 2021, Hyundai Oilbank partnered with Haldor Topsoe, a Danish company specializing in carbon reduction technologies, to push for the development of renewable synthetic fuels, known as e-fuels, which are carbon neutral and can allow vehicles, airplanes and ships to operate in a climate-friendly manner. The Danish company has advanced technology in separating hydrogen from blue and green ammonia.