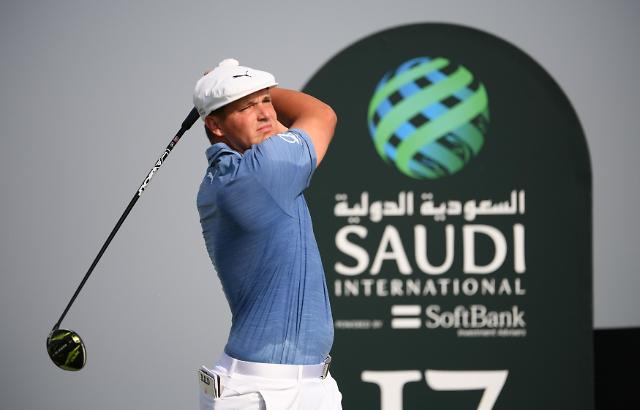 SEOUL -- There's no need for PGA big hitter Bryson DeChambeu to fly the ball over the fence. Organizers of the Asian Tour's season-opening golf tournament event in Saudi Arabia have extended the driving range to help the 28-year-old freely practice his swings.

The changes were made because the big-hitting American found the 300-yard driving range of the course was too short after driving his ball over the fence to land on the 12th tee during last year's tournament, said the organizers of the "PIF Saudi International powered by SoftBank Investment Advisers" event that will be held at Saudi Arabia's Royal Greens Golf and Country Club on February 3.

"Despite being at an uphill angle and around 300 yards long, our driving range at Royal Greens proved just a little short for Bryson last year, with a number of his drives peppering the tee box for the 12th hole behind the practice area," Mike Oliver, director of the tournament, told reporters.

According to Oliver, DeChambeu, who averages a massive 323.7 yards off the tee, has told the organizers that he  would  hit the ball "further than ever." DeChambeu's comments prompted Saudi staff to erect a new fence to "Bryson-proof" the range and stop his shots interfering with play in this year's Asian Tour season opener.

"What Bryson DeChambeau has brought to the game of golf is incredible -- none more so than his length off the tee, which brings huge fan interest and excitement whenever he steps up to the ball," said Oliver.

The world's No.8 is set to bring a new lower-lofted driver to the event, which he claims is capable of achieving 200 miles-per-hour ball speeds. He told reporters that he would show a lot of "longer drives."