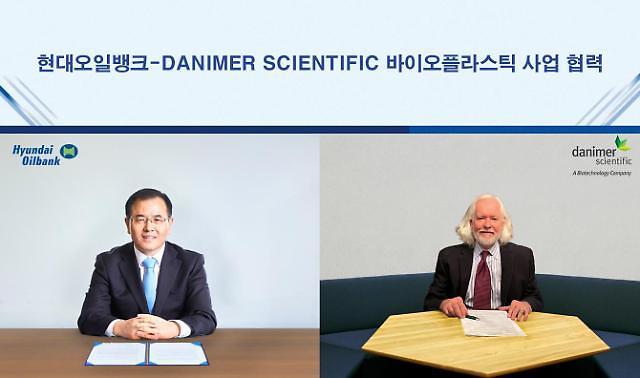 SEOUL -- Hyundai Oilbank, a refining unit of South Korea's Hyundai shipbuilding group, tied up with Danimer Scientific, a biopolymer manufacturer in the United States, to develop degradable plastic products using polyhydroxyalkanoates. They would cooperate in research, marketing, and manufacturing as well as joint investments.

Polyhydroxyalkanoates (PHAs) are produced by bacteria during the fermentation process of sugar or lipids including fats, oils and waxes to store carbon and energy, and can be used with other monomers to create different types of bioplastics that break down over time. PHAs are 100 percent biodegradable even in seawater.

Danimer Scientific uses PHA and other biopolymers to create a range of applications. The company's Nodax PHA is a class of bioplastics produced from bacterial microorganisms that store PHA polyesters for energy in their cell walls.

Hyundai Oilbank and Danimer Scientific would cooperate in PHA research, marketing, and manufacturing while developing new high value-added applications with PHA and considering joint investment in production facilities in response to Asian demand.

"Plastic use continues to increase despite the serious destruction of an ecosystem caused by the incineration and reclamation of waste plastics that are difficult to recycle. We can reduce environmental pollution by replacing existing plastics with bioplastics," Choi Jin-woo, a Hyundai Oilbank official in charge of new businesses, said in a statement on January 26.

Many degradable plastic products have failed to attract attention because of their weak durability, while some bioplastics are very brittle compared to those made from fossil fuel. The global demand for PHA and other types of bioplastics is increasing due to tightened eco-friendly regulations and widespread social awareness of environmental protection.

In November 2021, Hyundai Oilbank conducted empirical research to produce eco-friendly naphtha by injecting waste plastic pyrolysis oil into the process of refining crude oil. Naphtha is a flammable liquid hydrocarbon mixture produced from petroleum distillates, natural gas condensates and the distillation of coal and peat. It is used to dilute heavy crude oil, reduce its viscosity and facilitate transport.

Pyrolysis is a chemical recycling process that can convert plastics into high-quality oil using extreme heat and pressure. Recycled oil is processed into medium crude and light oil to be used in the production of lubricants and fuels. Previously, pyrolysis oil has not been used as a raw material for the production of petrochemical products due to impurities.

Hyundai Oilbank's research institute is studying ways to produce pyrolysis oil-based petroleum and petrochemical products by improving physical properties and removing impurities. The oil company will acquire certification from international certification agencies such as the International Sustainability and Carbon Certification (ISCC) to sell naphtha made of waste plastic pyrolysis oil as an eco-friendly green product.

Pyrolysis recycling is widely researched in South Korea to address concerns about waste plastics. The Ministry of Environment has formed a task force involving research institutes, private companies and academics to popularize pyrolysis recycling. Pyrolysis technology will be used to create synthetic gas (syngas) that can be used as the main material for the production of methanol and ammonia.