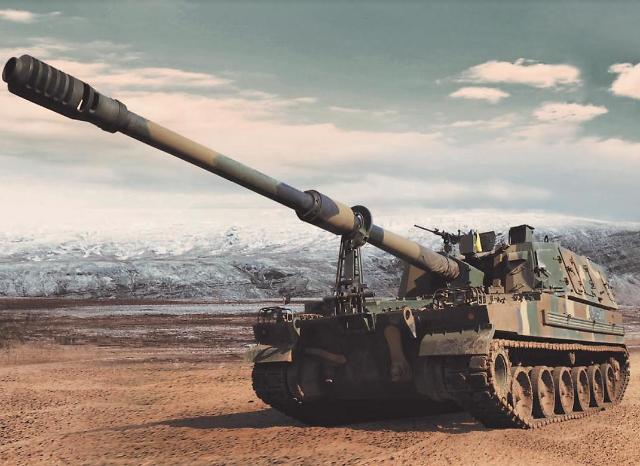 
SEOUL -- Egypt is the first foreign country to adopt a naval variant of South Korea's K9 self-propelled howitzer as an area denial weapon system that is used to prevent an adversary from occupying or traversing an area of land, sea or air. Along with technology transfer, Hanwha Defense will provide a variety of support programs including training and maintenance.

It would be the first export of a naval K9 variant, proving the tracked artillery’s versatile operational capability, Hanwha Defense said, adding that a package of hundreds of K9A1, the upgraded version of the K9 artillery system, and support vehicles would be provided to Egypt in a $1.7 billion deal signed on February 1.

The first batch of K9A1 EGYs would be delivered before 2025, with the remainder to be produced at a state-run military factory in Egypt.  Hanwha Defense said the K9 artillery system successfully proved its access denial capability by hitting targets precisely at sea during tests and evaluations.

The deal is the largest in scale in the export of the K9 artillery solution. "The latest deal with Egypt is significant in that Hanwha Defense has made its way across Africa for the first time with the K9, the world’s most advanced and proven self-propelled howitzer," Hanwha Defense CEO Son Jae-il said in a statement on February 3.

The K9 is by far the most popular self-propelled howitzer in the world. Egypt is the eighth foreign country to adopt the K9 artillery system after Turkey, India, Poland, Norway, Finland, Estonia and Australia. The K9A1 howitzer boasts high-velocity firing and quick displacement for firing support and direct engagement, excellent maneuverability and the ability to concentrate its firepower on select targets.

Equipped with a rotating turret that can traverse through a full 360 degrees, the 47-ton vehicle has a firing range of 40 kilometers (25 miles) and move at a maximum speed of 67 km per hour. It can fire its first round within 30 seconds from a stationary position and within 60 seconds while moving, with a burst rate of fire from six to eight rounds per minute.

Hanwha Defense described its K10 ammunition resupply vehicle capable of carrying 104 rounds as the world’s first automated robotic ammunition carrier operational in conjunction with the K9. The new K11 fire direction control vehicle for the Egyptian military will be equipped with high-tech sensors and communication equipment.