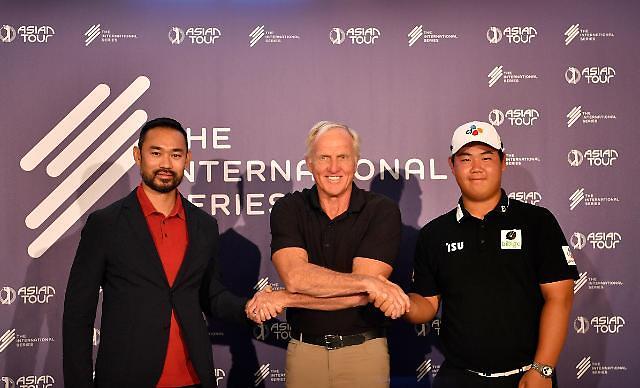 SEOUL -- Asian Tour and LIV Golf Investments unveiled the International Series of 10 events with a total purse of $300 million backed by the Saudi Arabian government's Private Investment Fund. " We are setting the Asian Tour up as a powerful new force on the world golf stage," former No. 1 golf player Greg Norman, the CEO of LIV Golf Investments, told reporters.

According to Asian Tour, the International Series will kick off in Thailand in March followed by events in Britain, South Korea, Vietnam, the Middle East, China, Singapore, and Hong Kong. Asian Tour will stage its first tournament in Britain in June 2022, the week before the US Open.

Norman, also known by his nickname of "The Shark," emphasized how golf can benefit parts of the world by boosting growth and development and said: "We now have the opportunity to do that in the Asia Pacific region and the Middle East with this incredible investment platform." The International Series will be fully integrated into Asian Tour's 2022~2023 schedule. Asian Tour said that the new tournament series was designed to attract new players, fans, and commercial interest to help stabilize the professional golf industry.

"We are on the threshold of a new era for Asian golf," said Cho Minn Thant, Commissioner and CEO, Asian Tour. "The International Series is a new upper-tier of elite events, the likes of which the region has not seen before, that will mark the start of a phenomenal period of growth for the Asian Tour. It also signifies the beginning of our relationship with our new strategic partner LIV Golf Investments and its CEO Greg Norman."

The first International Series event will be held as a four-day tournament at Black Mountain Golf Club in Hua Hin, Thailand on March 3. The next tournament event will be staged at London's Centurion Club in June with a $2 million purse. The International Series will visit South Korea, Vietnam, Indonesia, the Middle East, China, Singapore, and Hong Kong during the second half of 2022.