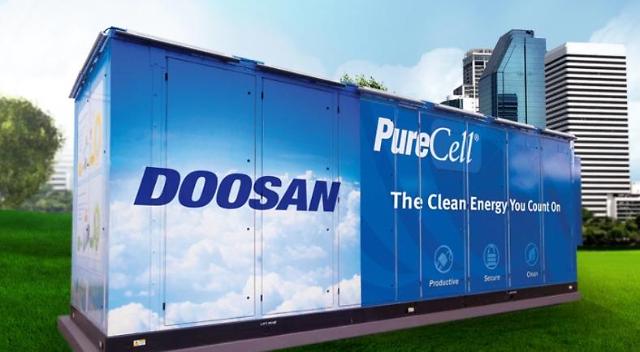 SEOUL -- Shell, a global energy and petrochemical group, teamed up with Doosan Fuel Cell and South Korea's Hyundai shipbuilding group to develop a solid oxide fuel cell system for commercial use by ships in 2025. For optimization, the tripartite consortium aims to test a 600-kilowatt system as an auxiliary power unit on actual trade routes for more than a year.

Solid oxide fuel cells (SOFCs) use common gas such as hydrogen as the main source of fuel. It is considered to be the most stable and power-efficient among fuel cell brothers. Because it has high power output compared to its size, SOFC is ideal for powering mega-sized heavy equipment such as oil tankers and giant tunnel boring machines.

Under a letter of intent signed by the three companies, a shipowner and a classification society would be drawn into the consortium later to demonstrate an efficient SOFC system. Doosan Fuel Cell said it would complete classification and development by 2024.

"The three-way partnership is an important starting point for Doosan Fuel Cell to speed up its marine fuel cell business and preempt the market," CEO Chung Hyung-rak said in a statement on February 7, describing SOFC as an effective solution to meet tightened international regulations.

Doosan Fuel Cell is in charge of system development, production and service support. The company is developing a SOFC system that operates at 620 degrees Celsius and has high efficiency and a relatively long life expectancy. Lower temperatures dramatically increase the number of potential applications and provide the opportunity to incorporate a wider variety of materials in SOFC power generation systems with greater reliability and lower cost.

Shell is responsible for ordering and managing ships, operating ships, and managing a SOFC demonstration project. Korea Shipbuilding & Offshore Engineering (KSOE) affiliated with the Hyundai shipbuilding group will carry out installation, system modification and integration work. "This cooperation will speed up the commercialization of a marine fuel cell system, which is a next-generation power source," an unnamed KSOE official was quoted as saying.

In March 2021, Doosan Fuel Cell partnered with the shipbuilding group to co-develop a megawatt-class SOFC system for vessels that will use liquefied natural gas to have a power output of more than 40 percent compared to conventional diesel engines. Six months later, Doosan Corporation, the holding company of South Korea's Doosan Group, completed the development of a 10-kilowatt SOFC system with the world's highest electricity generation efficiency.

South Korean shipbuilders have jumped into the race to develop new SOFC systems. Many vessel operators are switching to clean energy systems as the International Maritime Organization (IMO), a U.N. maritime safety agency, has adopted mandatory energy-efficiency measures to reduce emissions of greenhouse gases from ships.

In January 2021, a crude carrier with a SOFC propulsion system developed by Daewoo Shipbuilding & Marine Engineering won certification from the American Bureau of Shipping, a maritime classification society. Samsung Heavy Industries has partnered with Bloom Energy to develop core technologies for highly efficient SOFCsfor ships by 2022.