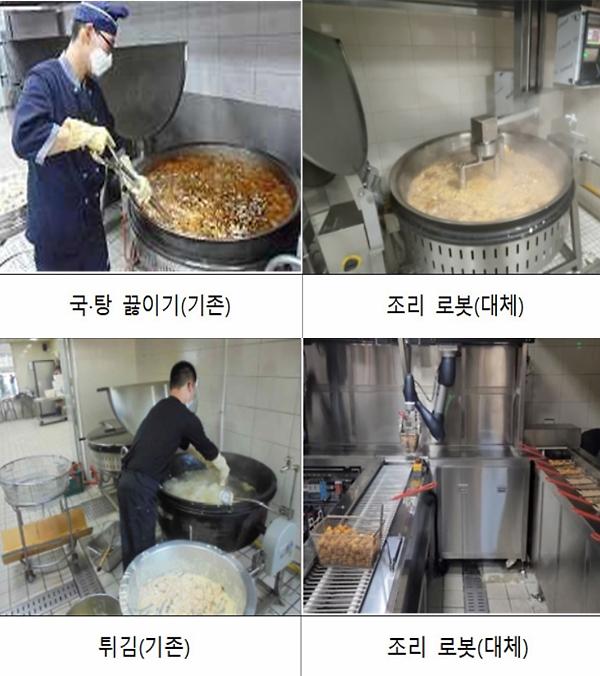 [Courtesy of the Ministry of National Defense]

SEOUL -- South Korea's defense ministry tested four different types of robot chefs to reduce the burden of military cooks and risks of safety accidents. Currently, some 24 human military cooks are in charge of some 3,000 soldiers' meals at the country's largest army boot camp in Nonsan some 154 kilometers (96 miles) south of Seoul.

South Korea currently has about 550,000 young men serving their mandatory military service. Every able-bodied South Korean male aged 18 to 28 is required to serve for more than 18 months. Those who are not physically or mentally able enough to serve in the military are assigned as public service workers deployed to local administrative facilities including elderly homes and district administration offices.

Among all military occupational specialties, military kitchen crew are considered one of the hardest jobs. They are the first ones to wake up at about 5:00 a.m. and the last ones to go to bed. They are exposed to many safety accidents such as burn injuries and respiratory diseases. Military cooks are constantly under a lot of stress because they cannot get enough sleep.

However, despite the efforts of military kitchen crew, the controversy over the poor quality of military meals has been raised for a long time. It is because the members of a kitchen crew are selected among conscripted men regardless of their career backgrounds. In 2021, anonymous social media posts became viral in South Korea after some soldiers revealed photographic images of poorly cooked menus.

The Ministry of National Defense said in a statement on February 7 that the ministry started the demonstration of four types of robot chefs at a boot camp in Nonsan in November 2021. The robots are used to fry, stir-fry, and cook soup and rice. The defense ministry said the robots were adopted to reduce the risks of burn injuries and musculoskeletal diseases caused by excessive cookhouse labor.

When a human cook places ingredients into a cage, a frying robot will autonomously start cooking. Fried menus will come out of the boiling oil pot on a conveyor belt. An autonomous rinse system will wash hundreds of kilograms of rice. Currently, human cooks wash the rice in huge bowls using specially made metal shovels. Autonomous stir-frying robots use special mechanical kitchen thongs to evenly mix and fry ingredients.

"We hope that the pilot distribution project of robot chefs will generate many different outcomes such as improving the quality of meals, reducing the burden of military cooks and preventing safety accidents," Defense Minister Suh Wook was quoted as saying. The ministry will help the private robot industry by providing test-beds for commercial robots in the future.

In South Korea, cooking robots are mainly used to cook fried chicken. In August 2021, popular chicken franchise Kyochon opened the brand's first store with a cooking robot in the western port city of Incheon that helps its human coworkers in the kitchen.