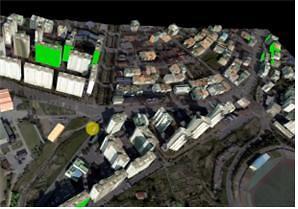 While some guided weapons such as fire-and-forget tank hunter missiles rely on cameras and sensors to find the optimal path to its prey, most weapon systems need the manual work of inserting various data about the target and geographical surroundings to make sure the weapon precisely reaches it.

Target data is especially important for cruise and long-range missiles so that the warhead can fly at a low altitude and evade obstacles such as the enemy radar network and anti-aircraft batteries. The dataset mainly consists of land images filmed by satellites and spy aircraft.

The Agency for Defense Development (ADD) controlled by the Defense Ministry said in a statement on February 8 that its research team developed a 3D "Target Extraction & Matching" technique that can calculate target information located in hard-to-reach areas through the integration and management of data. The target dataset is used to create 3D maps that contain geographical and building information. Simulations can be run on the target map.