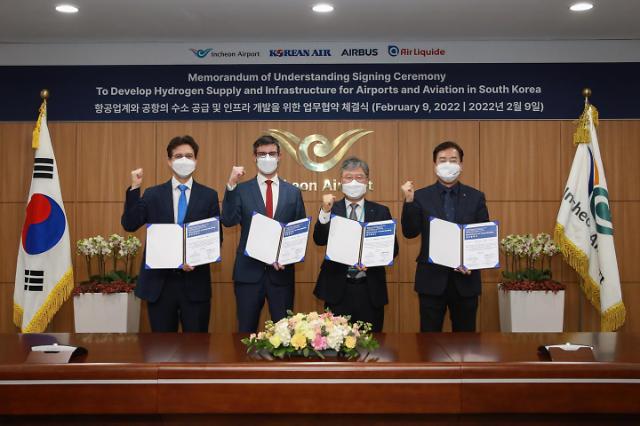 SEOUL -- Airbus, a European multinational aerospace corporation, tied up with Korean Air and other companies to establish a supply system and airport infrastructure for hydrogen-powered commercial airplanes in South Korea, which is aggressively pushing for the introduction of a hydrogen ecosystem encompassing transportation, electricity generation and other fields.

Airbus said it has signed a memorandum of understanding with Korean Air (KAL), Air Liquide S.A., a French supplier of industrial gases and services, and Incheon International Airport Corporation, the operator of South Korea's main gateway, to explore the use of hydrogen at an international airport in the western port city of Incheon.

Airbus and its partners would study the development of airport infrastructure to support the deployment of hydrogen-powered commercial planes that do not produce harmful emissions. KAL said that the partnership is based on Airbus' plan to commercialize hydrogen-fueled aircraft by 2035.

Airbus said the partnership reflects a shared ambition to drive the emergence of an innovative aviation sector dedicated to supporting South Korea's goal of carbon neutrality by 2050. "In the coming years, the Korean aerospace ecosystem will have to adapt to new fuels and new distribution channels. Airbus and its partners need to be coordinated to ensure we will be ready," Airbus' Asia-Pacific head Anand Stanley said in a statement on February 10.

"Together we will prepare a roadmap to first develop hydrogen usages at and around Incheon Airport and then build scenarios to support the deployment of hydrogen ecosystems connected to other Korean airports," Stanley said. Airbus said the partnership would focus on carrying out studies aimed at defining and developing the required liquid infrastructure at Incheon International Airport.

Progress has been made in developing the underlying technology of hydrogen planes that essentially require a storage system to safely store liquid hydrogen and fuel cells to convert hydrogen to electricity. The liquefaction of hydrogen requires cooling to a temperature of minus 253 degrees Celsius and subsequent storage in cryogenic containers. The advantage of liquefied hydrogen is its high density compared to compressed gas.

In a separate announcement, KAL said the partnership is aimed at leading the paradigm shift in the aviation industry that hydrogen aircraft will bring. "It is a symbolic starting point for preparing a system for hydrogen supply and infrastructure construction in the aviation industry and airport facilities, which are relatively late to introduce hydrogen compared to other industries," said KAL vice president Lee Soo-keun.