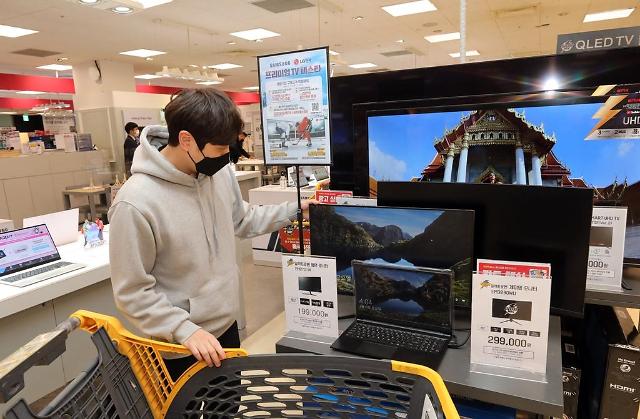 
SEOUL -- A prolonged COVID-19 pandemic has boosted sales of PC monitors and TVs, sales data of Emart, a mega-store franchise operated by South Korea's retail giant Shinesgae, showed. The boost in monitor sales was prompted by remote workers who work at their homes to prevent the spread of the infectious disease.

Since the first wave of the pandemic hit South Korea in early 2020, about 80 percent of workers have worked remotely and some workers still remain to work at home to prevent the virus from spreading among workmates. A survey of 897 workers, conducted by education company Hunet in 2021, showed that the average satisfaction level of remote working was four on a scale of one to five.

Emart said in a statement on February 14 that sales of PC monitors and TVs recorded between January and February 10 2022 increased by 40.7 percent and 13.8 percent, respectively, compared to the same period a year ago.

Remote workers prefer to use more than one PC monitor for their PC or laptop computer. Sometimes people work in their living room by connecting their computers to high-resolution TVs. Emart said that large-sized TVs were the favorite. Sales of premium 75-inch TVs rose by more than 124 percent. Sales of accessories such as soundbars and various cables also increased by 42.5 percent.

"We predict that the sales of digital appliances will continue to increase because the number of remote workers who also spend time at home consuming entertainment content will also increase," Emart's digital appliance division manager Kim Eui-soo was quoted as saying.