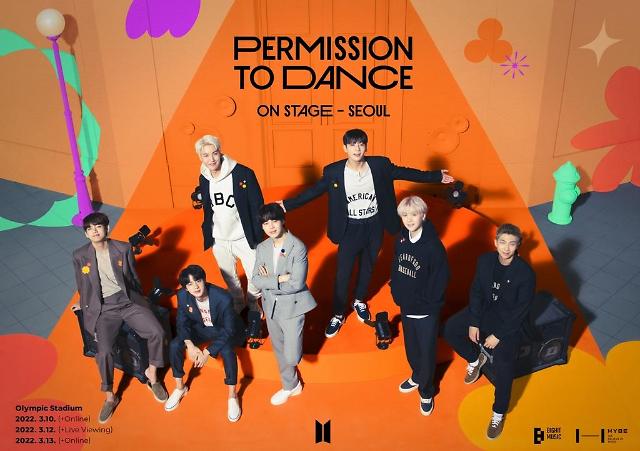 SEOUL -- BTS will host its first offline Seoul concert in 28 months despite a never-ending pandemic that has left tens of thousands of people infected with COVID-19 every day in mid-February. The seven-member band will sing and interact with fans for three days from March 10.

"BTS Permission To Dance On Stage - Seoul" will be held through offline performance and online live streaming on March 10, 12 and 13, the band's agency said through Weverse, an official fan community platform. The event will take place at the Jamsil Sports Complex in southeastern Seoul.

Jimin, a member who was infected with COVID-19 on January 30 and received appendicitis surgery in the same month, will turn up for the March concert. He was discharged from the hospital on February 5.

When the pandemic hit the global community in 2020, BTS's 2020 Map of the Soul concert tour was canceled. However, the band attracted a lot of fans in June 2020 through a live virtual concert using various digital and social media platforms in a special studio. It was the largest paid online concert in the world.