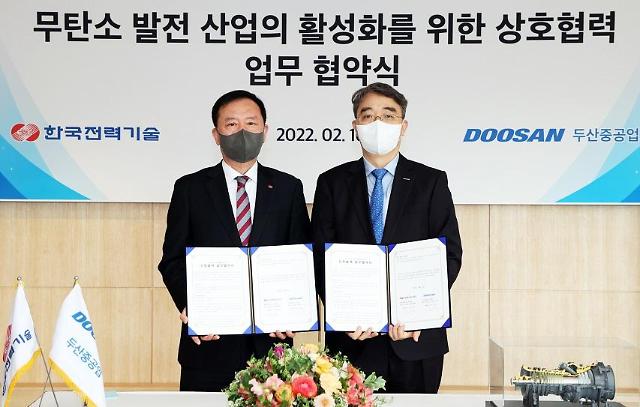 Hydrogen can be produced by burning and reforming ammonia in a micro-reforming system. Ammonia is seen as an ideal resource to establish an eco-friendly hydrogen fuel cell-based infrastructure. KEPCO E&C is in charge of developing overall power plant engineering technologies, while Doosan Heavy will develop key components of a hydrogen turbine and ammonia reforming facilities.

Gas turbines have become one of the most widely-used power generating technologies because they reduce the emission of fine dust and other air pollutants. Policymakers in Seoul have described independence in gas turbine technology as an important task in terms of energy security. A task force involving private companies, state bodies and research institutes has been launched to push for the early commercialization of gas turbine power generation.

South Korea has presented a goal to commercialize a 300MW hydrogen gas turbine by 2040. As a bridge power in energy conversion, a standard model of LNG turbines will be developed. Doosan Heavy has joined a project to demonstrate mixed hydrogen combustion technologies that burn natural gas together with hydrogen in the southeastern industrial city of Ulsan.

Doosan Heavy has been involved in a project to demonstrate mixed hydrogen combustion technologies. The Ministry of Trade, Industry and Energy aims to commercialize mixed combustion technologies that burn more than 30 percent of hydrogen with natural gas by 2035. The demonstration of power generation using 20 percent of ammonia in coal power generation will be commercialized in 2030.

On the same day, Doosan Heavy signed a separate business cooperation agreement with Korea Midland Power and JC Energy to promote a 100-megawatt fuel cell power generation project in an industrial complex in the southwestern county of Yeongam.

Korea Midland Power, a public power company, will be in charge of purchasing renewable energy supply certificates and operating a power plant, while JC Energy, a solar and electrical services company, will obtain business licenses and provide a site. Doosan Heavy is responsible for operation and maintenance as well as engineering, procurement and construction (EPC).

Doosan Heavy will supply a hydrogen turbine and fuel cells produced by its clean energy wing, Doosan Fuel Cell. Because hydrogen fuel cell power generation systems are much smaller than thermal power plants, they are ideal for providing power to microgrids, which are networks of small, isolated smart power grids, in urban environments.