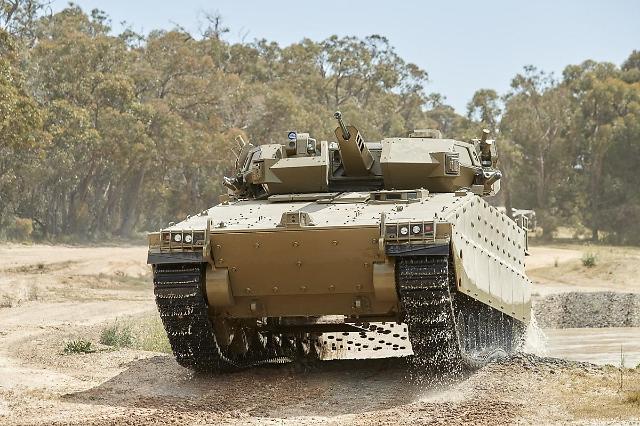 
SEOUL -- A Redback infantry fighting vehicle developed by Hanwha Defense will be tested at an army panzer battalion in South Korea to evaluate its operational fit in April, a month after the tracked combat vehicle returned home following its successful test and evaluation as one of the two final candidates for an Australian military project to replace old armored personnel carriers.

Three prototypes of a Redback variant called AS21 have been sent to Australia for tests and evaluations, competing with the Lynx developed by Rheinmetall Landsysteme of Germany. One shipped back home is to be handed over in April to an armored cavalry unit for two months of trials, according to Hanwha Defense, a defense business arm of Hanwha Group.

The trials in South Korea will focus on the Redback’s mobility, operability and maintainability. For mobility tests, Hanwha Defense said the vehicle is set to be assessed on paved and unpaved roads with various driving skills, including pivot, obstacle clearance and night maneuvering with situational awareness equipment.

Operability trials will include evaluation of situational awareness cameras, operation during hard braking, load space and the ergonomics of various seating configurations. Tactical operations of the auxiliary power unit and turret systems are to be tested. To review operational sustainability, the vehicle will be assessed in various recovery situations.

Hanwha Defense said the Redback is scheduled to demonstrate its offboard health and usage management system (HUMS), which monitors and diagnoses component faults in early stages. The Redback will be equipped with a hybrid turret capable of launching anti-tank missiles, a 30mm main gun and a 7.62mm machine gun.

The Redback capable of carrying up to 11 people at a maximum speed of more than 65 kilometers (40 miles) per hour is equipped with high-tech sensor systems such as Iron Vision, which allows the crew to see through the vehicle's armor by projecting the image outside the vehicle onto their helmet-mounted displays, and an active protection system. Hanwha Defense has ambitions for infantry fighting vehicle programs outside Australia and is actively pursuing opportunities in the United States and Europe.
.