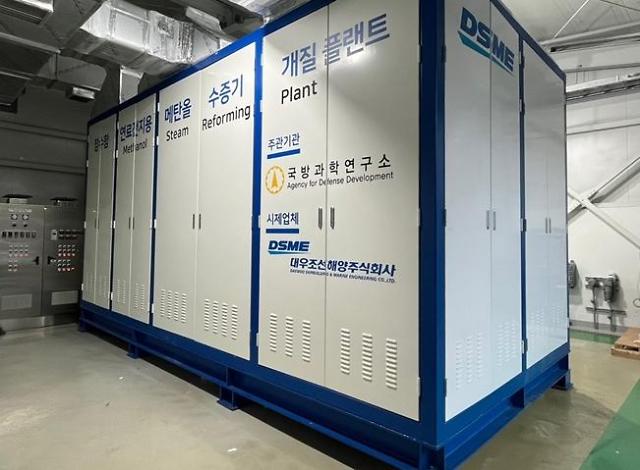 
SEOUL -- South Korea's defense technology development agency has developed the technology of methanol-reforming plant for hydrogen fuel cells that can enhance the operational performance of submarines. It directly produces high-purity hydrogen that can be produced in submarines by reforming methanol.

Air-independent propulsion (AIP) systems can improve the underwater performance of diesel-electric submarines and reduce their vulnerability. Fuel reforming is a method of changing the form of a chemical structure from the component of fuel and extracting the desired material. The technology does not require a separate hydrogen charging facility and can reduce charging time.

The Agency for Defense Development (ADD) said that the technology of its methanol-reforming plant can play a key role in building a hydrogen economy by transferring technology to fuel cells for private ships or industrial fuel cells.

Methanol is emerging as a new clean-burning fuel. Unlike natural gas that requires high pressure and cryogenic temperatures, methanol is easy to store and transport even at room temperature and general atmospheric pressure. One problem with high concentrations of methanol in fuel is that alcohols corrode some metals.

In November 2021, Daewoo Shipbuilding & Marine Engineering (DSME), a shipbuilder involved in the construction of attack submarines, delivered a plant installed with a methanol steam reforming system for submarine fuel cells. The plant that produces high purity hydrogen through methanol and water was delivered to ADD.