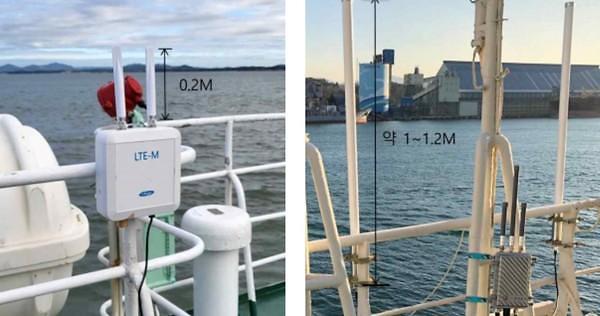 [Courtesy of the Ministry of Oceans and Fisheries]

Based on a high-speed digital network that can communicate even at sea up to 62 miles away from the coast, the Ministry of Oceans and Fisheries launched the sea navigation service in January 2021 to provide sea traffic conditions and information on accidents, weather and dangerous situations. Vessels of less than three tons can use a smartphone app, and bigger ships can use a dedicated terminal.

Initially, the ministry showed self-confidence over the efficiency and reliability of the navigation service, saying it was technically ahead of Europe's sea traffic management (STM) project aimed at enhancing the safety of maritime transport. South Korea wanted to test its navigation technology for ships operating on European routes through cooperation with Denmark, Sweden, Australia and China.

However, an unexpected technical problem came up as some small fishing boats had no choice but to use the service through an inconvenient sea navigation app with a shorter communication distance and a smaller screen size. The transceiver's antenna length is about 1.2 meters, making it difficult to install in small boats.

For the smooth operation of its sea navigation service, the ministry developed new transceivers applicable to small ships and established revised performance and verification standards. The antenna length was reduced to 20 centimeters with small boats allowed to use a high-speed maritime wireless communication network up to 50km from the coast. Data transmission quality is the same as existing transceivers.

"The new sea navigation terminal for small ships will be available to fishermen from the second half of this year," Jeong Tae-Seoung, a ministry official in charge of maritime safety, said in a statement on February 23. "Small fishing boats will be able to check real-time risk information if they actively use the sea navigation service through their terminals, which will greatly contribute to preventing marine accidents."

For its new service, South Korea has established a high-speed digital network backed by 263 base stations and nine network operating centers. An automatic voice guidance service will be provided when there is a risk of collision. Various information like weather, ship location and accidents are provided to identify potential risk factors.

A rescue request can be automatically connected to the operation center. The navigation service supports remote medical care by naval vessels and provides voice guidance on very high frequency (VHF) communication channels and safety precautions with the control room automatically when a merchant ship enters a controlled area.

The traditional electronic navigation chart should be updated manually and collision prevention depends on the naked eye or radar. But the new service enables automatic updates, monitors the operational status of passenger ships in real-time, automatically reports port entry and departure by fishing boats, and allows voice and video communication between ships.