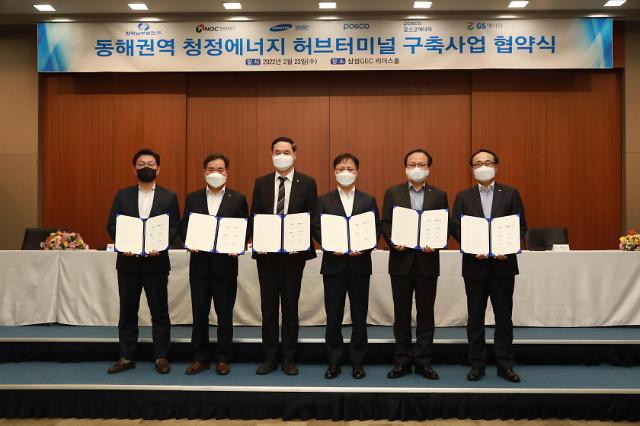 SEOUL -- Six South Korean companies including POSCO and Samsung C&T will push for a joint project to build a hub terminal that stores overseas-produced hydrogen and ammonia and supplies them to power plants or hydrogen charging stations. They are all involved in hydrogen-related projects at home and abroad.

POSCO said the green energy terminal would be built in an eastern coastal region. Exact coordinates were not disclosed. Other companies involved are  GS Energy, Posco Energy, Korea National Oil Corporation, and Korea Southern Power. The Seoul government predicts annual hydrogen demand in South Korea will rise from 3.9 million tons in 2030 to 27 million tons in 2050.

Ammonia is produced through a chemical reaction between hydrogen and nitrogen at high pressure and temperatures of 450 degrees Celsius. The decarbonization of ammonia production is an integral part of the global transition to net-zero emissions by 2050, as the production, storage, transportation and distribution of ammonia is less complicated than other ordinary fossil fuels. Ammonia is seen as an ideal resource to establish an eco-friendly hydrogen fuel cell-based infrastructure.

In February 2021, POSCO partnered with the Hyundai auto group to develop green hydrogen manufacturing technology using ammonia. POSCO would develop technologies to extract large amounts of hydrogen from ammonia and supply green hydrogen to power stations and industrial facilities. POSCO's business model is to decompose water into electricity made of renewable energy to produce green hydrogen, synthesize it into ammonia, and extract hydrogen again from ammonia.