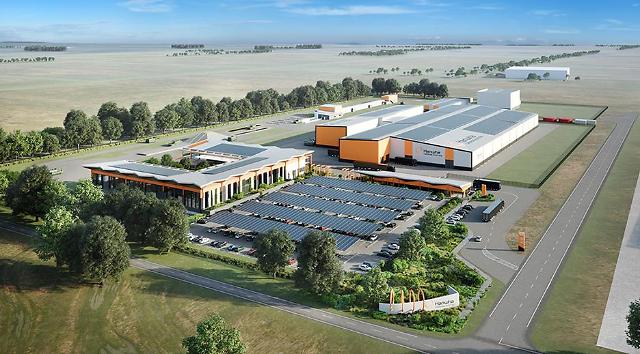 This picture released by Hanwha shows the bird-eye view of a K9 production plant in Australia. [Courtesy of Hanwha]

SEOUL -- Hanwha Defense, a key defense contractor in South Korea, will build its first overseas manufacturing plant in Australia to churn out K9 self-propelled howitzers and probably Redback infantry fighting vehicles if it beats a German competitor. It can serve as a base to deal with exports to European countries.

The plant will be built on 32,000 square meters of land in a site near Avalon Airport in the Greater Geelong area of Victoria. The groundbreaking ceremony may take place as early as the end of March for completion two years later. Australian partners and suppliers will be allowed to move into the site.

This is the first time a South Korean defense company has secured a production base overseas. Australia signed a $730 million contract in December 2021 to locally produce 30 AS9 Huntsmans and 15 supply vehicles. The Australian operation will help Hanwha fulfill contracts in other parts of the world.

Meanwhile, Hanwha Defense will host the first meeting of a K9 user community in April at its home base in the southern city of Changwon. Invitations have been sent to partners in Finland, Norway, Estonia and Australia. The user community meeting will take place regularly with a rotating host to have multiple working group sessions where each participant can share its unique experience and knowledge accrued from the operation of K9s.

The K9 is by far the most popular self-propelled howitzer in the world. Egypt inked a $1.7 billion contract in February 2022 to introduce hundreds of K9A1, the upgraded version of the K9 artillery system, and support vehicles.