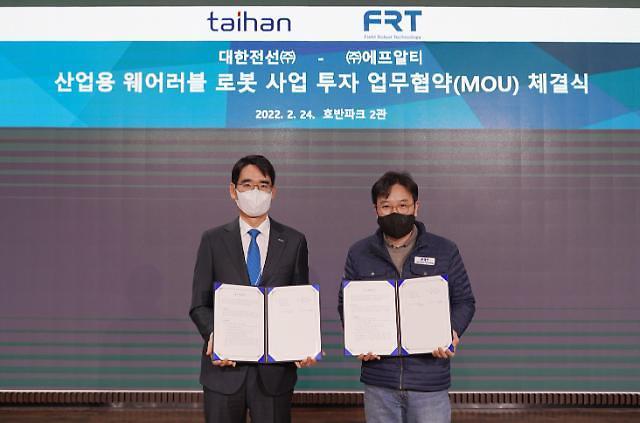 Through cooperation with FRT, Taihan said it would commercialize business models and actively pioneer overseas markets by utilizing its global network. The amount of investment was not disclosed. Taihan said its investment in FRT is based on its judgment that demand for industrial wearable robots would increase due to tightened safety rules restrictions at worksites.

Exoskeleton suit-type wearable robots have been adopted by many sectors to increase the strength and endurance of human workers. Robotic limbs fitted with servo motors detect the movement of joints and body parts to reinforce the movement. A worker wearing an exoskeleton robot can lift heavy objects and travel long distances on foot.

"We will preempt domestic and foreign markets through active commercialization and cultivate it as a new growth engine," an unnamed Taihan official said in a statement on February 25. FRT has commercialized a solution that provides customized products specialized for each worksite in a short period of time by modularizing robot components.