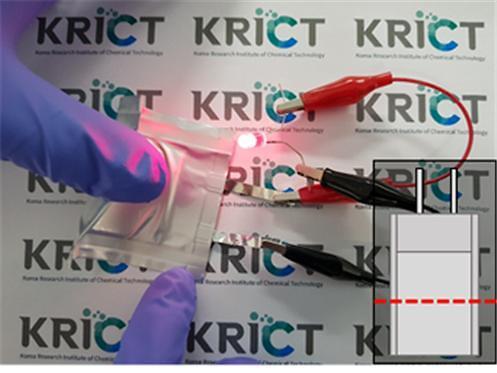 SEOUL -- A state research body in South Korea has developed an innovative polymer technology that can accelerate the commercialization of high-performance and stable all-solid-state batteries for electric vehicles. For commercialization, the institute will transfer its technology to Energyn, a domestic battery equipment manufacturer.

Solid polymer electrolytes developed so far had several obstacles to be commercialized, such as low lithium-ion conductivity at ambient temperature. It is also difficult to form a stable state in which ions can be smoothly transferred through an interface where it meets electrolytes.

The Korea Research Institute of Chemical Technology (KRICT) said that its research team has developed a highly stable solid-state polymer battery technology. A solid polymer electrolyte with the excellent conductivity and flexibility of lithium ions was developed by designing ion-conductive polymer plasticizers to be connected to each other in the form of a net.

"We hope to contribute to solving energy and climate change problems and foster national technological competitiveness through cooperation with related companies to secure original technologies for all-solid-state batteries," KRICT head Yi Mi-hye said in a statement on February 25.

Through joint research with Energyn, the institute said it would solve problems in the manufacturing process to realize the commercialization of solid-state batteries, citing the enormous growth potential and economic ripple effects of highly stable batteries.

In September 2021, LGES, the battery-making wing of South Korea's LG Group developed innovative technologies that can advance the commercialization of all-solid-state batteries that use composite-type solid electrolytes, using micro-sized silicon particles which are comparatively cheap and easy to use.