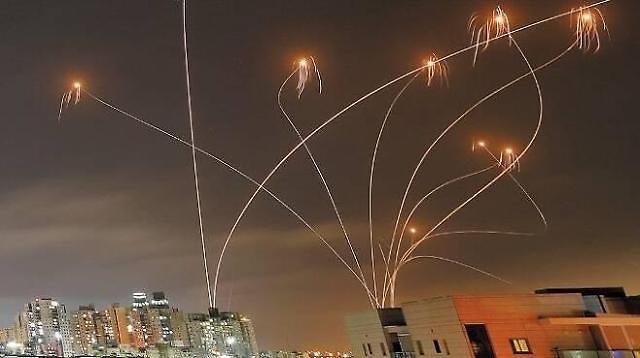 LAMD is the Korean version of Iron Dome, a dome-shaped air defense network that Israel has developed to intercept and destroy short-range rockets and artillery shells. The LAMD project is aimed at installing guided missile launchers at various locations to protect important national and military facilities from the threat of North Korea's long-range artillery deployed along the heavily armed inter-Korean border.

At a military test site in Anheung, some 200 kilometers southwest of Seoul, on February 23, a test launch was successfully carried out to verify the flight performance of LAMD and South Korea's L-SAM system that will constitute a multi-layer missile defense network, Park Soo-hyun, a senior presidential secretary for public communication, said in a Facebook post on February 27.

"The Korean-style Iron Dome that will defend against North Korea's long-range artillery (shells) flying below an altitude of 10km is expected to be far different from Israel's Iron Dome," Park said. Detailed information was not disclosed, but South Korea would use much better radars and equipment than Israel's.

"South Korea will have defense capabilities against North Korea's long-range artillery and ballistic missiles with its own Iron Dome and a missile defense system," Park said in a somewhat exasperated voice, refuting a newspaper article that criticized President Moon's defense policy and peace overture toward North Korea. He said Moon has not spared efforts to secure strong defense capabilities.

South Korea has strived to develop an independent three-tier aerial and missile defense system, based mainly on technology it has acquired through a joint project involving South Korean and Russian defense firms. The L-SAM, based on the Russian S-400 technology, is an upper-tier interceptor to offer capabilities similar to that of the Terminal High Altitude Area Defense (THAAD) system, an advanced missile shield deployed by American troops in South Korea.

Because U.S companies are reluctant to transfer technology, South Korean developers have forged strategic partnerships with Russian firms. The L-SAM system consists of a ballistic missile interceptor and an aircraft interceptor, along with control stations, radars and launchers.

The Cheolmae-2 (Cheongung) middle-tier missile defense system can intercept targets at an altitude of up to 40 km. Cheongung with hit-to-kill technology was developed with technical support from Russia's Almaz Antey to replace U.S.-made Hawk batteries. A complete battery consists of up to six transporter erector launchers (TELs), an X-band 3D radar, and a fire command vehicle.

A low-tier missile defense system intercepts missiles at altitudes of around 20 kilometers.