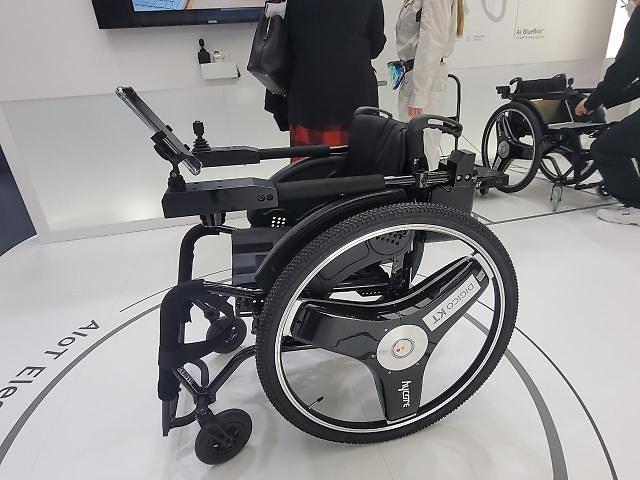 In collaboration with Hycore, a domestic robot system developer, KT has developed two types of motorized wheelchairs with automatic auxiliary driving functions. One is an IoT model and the other is an AIoT model. They can be easily loaded into vehicles because their weight is 27 kg and 30 kg, respectively.

KT said that a hand-pushed manual wheelchair can be used as an IoT electric wheelchair by installing an IoT joystick and an electric motor wheel kit. If an autonomous driving device is additionally installed, it becomes an AIoT wheelchair that enables automatic auxiliary driving.

"When the electric wheelchair is overturned, a sensor can detect it," Cho Young-bin, deputy head of KT's IoT platform business team, told Aju Business Daily. He said that breathing difficulty or heart rate checks are technically possible in partnership with healthcare companies. If an accident is detected, safety measures can be taken by automatically calling nearby shelters or guardians through emergency calls based on IoT communication technology.

Compared to manual wheelchairs, electric wheelchairs that can be controlled using a joystick or other devices are handier for moving on the streets but they are not suited for indoor operations as they are larger and can easily damage people or obstacles. Autonomous wheelchairs that can detect obstacles, select routes and move to a chosen destination have been tested for use at hospitals and airports. However, high costs have hampered commercialization.

South Korea's Hyundai auto group has been involved in the development of self-driving wheelchairs based on an "in-wheel" system that can be attached to a manual wheelchair, along with cameras, ultrasonic sensors and a lidar system that measures distance by illuminating the target with laser light.