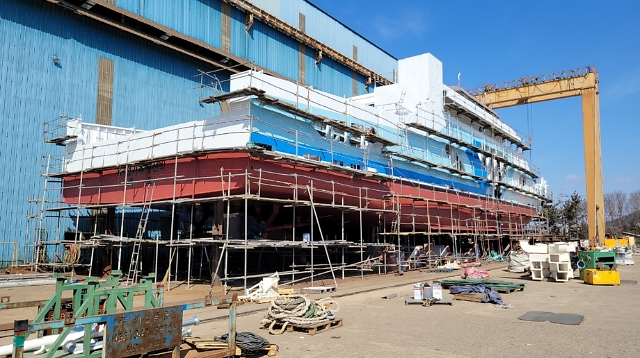 SEOUL -- A 420-ton electric propulsion passenger ship that could transport cars and cargo together has been built. It is South Korea's first eco-friendly ship installed with a mobile battery pack system in the form of a vehicle.

A launching ceremony will be held on March 4 at a port in the southwestern city of Mokpo, which has been selected for a five-year government project that began in 2020 to develop electric propulsion ships with the state-funded Korea Research Institute of Ships and Ocean Engineering (KRISO), private companies, research institutes, and university teams.

After a demonstration period to verify its operational performance at sea, the ship, which is 49 meters long and can carry 125 passengers and 20 vehicles, is to operate on coastal sea routes between Mokpo and nearby islands.

Detailed information such as the structure of the vessel's power system was not disclosed. The propeller shaft of electric propulsion ships is connected to propulsion motors. Normally electrical propulsion is used in small vessels but shipping companies are adopting the system for large vessels to comply with tightened greenhouse gas regulations.

In July 2021, South Korea's Hyundai auto group teamed up with Hyundai Global Service, an engineering service wing of South Korea's Hyundai shipbuilding group, and Korean Register (KR), a maritime classification society, to commercialize a fuel cell electric propulsion system for ships. The auto group has tried to expand the application of its automotive fuel cell technology to other areas such as sea vessels, railways and power generation.