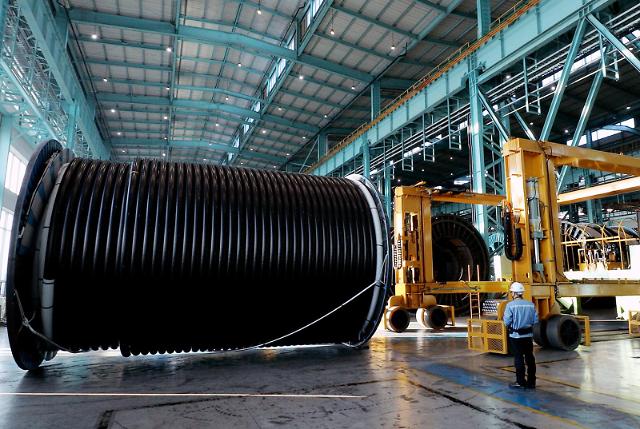 SEOUL -- Taihan Cable & Solution, a power cable and grid infrastructure company in South Korea, has secured a fresh order worth about 60 billion won ($49.8 million) through its American subsidiary to provide a 230 kilovolt-class high voltage power grid that links an offshore wind power complex and power systems to stabilize the supply and demand of urban electricity.

The new order brought to about 190 billion won the total value of orders that Taihan Cable's U.S. subsidiary has won so far this year. The South Korean company predicts more orders in the U.S. market thanks to a strong clean energy push by the Biden government. Taihan Cable predicts that the share of renewable energy generation in the United States is expected to expand rapidly from 21 percent in 2020 to 42 percent in 2050.

The South Korean company has an eye to U.S. offshore wind power projects along the eastern coast. "Large bids continue across the United States thanks to the U.S. government's infrastructure expansion policy and the full-fledged trend of renewable energy projects," an unnamed Taihan Cable official said in a statement on March 3, adding that the backlog of orders in 2022 would far exceed that of 2021. The company has built a new submarine cable plant in Dangjin, some 80 kilometers (49.7 miles) southwest of Seoul.