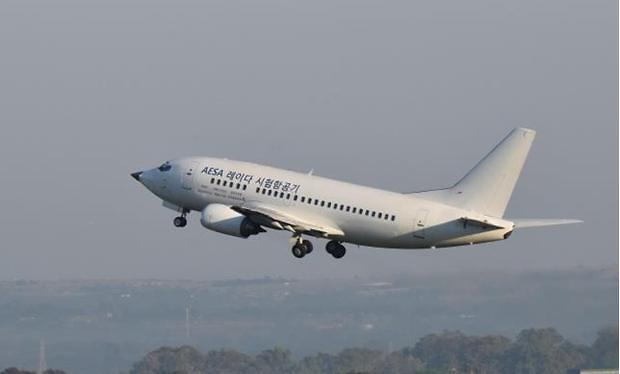 
SEOUL -- A flight test to verify the performance of a computer-controlled array antenna system for South Korea's homemade KF-21 fighter jet will begin in domestic airspace in mid-March, using a Boeing 737-500 plane modified into a flying testbed in South Africa. The system is an essential device that determines the survival of fighter jets in aerial warfare and is used to detect, track and form images of aerial and ground targets.

Radar function and performance tests have been completed abroad through 10 sorties in November and December 2021. The domestic test will run until April next year before a KF-21 jet fighter installed with the system conducts the final stage of evaluation until the first half of 2026, according to the Defense Acquisition Program Administration (DAPA), a state arms procurement agency controlled by the Defense Ministry.

About 62 items will be tested through a total of 50 flights, along with the test of a detection and tracking function in an air-to-air mode and the design verification of acquiring synthetic property radar (SAR) images. SAR is a form of radar that is used to create two-dimensional images or three-dimensional reconstructions of objects, such as landscapes.

"The KF-21 AESA radar's performance will be more stabilized through domestic flight tests," Roh Ji-man, a DAPA official in charge of the KF-21 project, said in a statement on March 4. US companies such as Lockheed Martin were involved in the KF-X project, but Washington has been reluctant to transfer key technologies for stealth fighters and an advanced radar system, prompting South Korea to acquire related technologies independently or through cooperation with other foreign companies.

The state-run Agency for Defense Development (ADD) and Hanwha Systems, a provider of defense products and technologies, have been involved in the development of AESA and automatic terrain-following and terrain avoidance technologies that allow high-tech aircraft to make detection by enemy radar more difficult by flying low and safe along the terrain.

Additional flights will be conducted in South Africa and South Korea to test topographic tracking and avoidance functions.

The first AESA prototype was unveiled in 2020 and sent to ELTA Systems, an Israeli provider of defense products, for ground and flight tests. In 2021, South Korea rolled out the first KF-21 prototype installed with an AESA system, after nearly two decades of strenuous work to shake off doubtful or sometimes depreciatory eyes from top-class foreign aircraft makers.

With AESA radars, it is possible to detect a large area, perform multiple missions, and engage multiple targets simultaneously, Hanwha Systems said, adding that fast beam steering is possible by electronically controlling a thousand small transmission and reception integration modules fixed to the front of the radar.

"We will challenge the global market as well as contribute to the successful development of homemade fighter jets by optimizing the performance of AESA radar's demands through the remaining domestic and international flight tests," said Hanwha Systems CEO Eoh Sung-chul, showing confidence over the development of a reliable system that can be sold abroad and dispel concerns about independent technology development caused by Washington's refusal to transfer technology.

The  KF-21 project is aimed at manufacturing 120 fighter jets that would replace South Korea's aging fleet of US-made F-4 and F-5 fighters. Specifications outlined by Korea Aerospace Industries (KAI), the sole aircraft maker in South Korea, showed that the fighter's maximum speed is Mach 1.81 with its range put at 2,900 kilometers (1,798 miles). With a maximum payload of 7.7 tons, 10 "pods" for missiles and fuel barrels are installed on the bottom of the fuselage and wings.

South Korea has yet to overcome challenges such as the development of a long-range missile system and seekers for missiles to track ground and air targets. Germany's IRIS-T and MBDA's Meteor have been selected for air-to-air short- and mid-range missiles. As for the long-range air-to-ground weapon, South Korea has pushed for the development of its air-launched cruise missile (ALCM) by 2028.

AESA technology can be applied to other military equipment. South Korea has embarked on the development of a homemade close-in weapon system (CIWS) that would be used for the defense of next-generation destroyers and other warships against incoming threats such as small speed boats, surface torpedoes, missiles and helicopters penetrating outer defenses.

Through cooperation with unspecified foreign companies, DAPA aims to acquire core technologies for a close-in weapon system that can neutralize supersonic or sea-skimming missiles and incoming high-speed ships within its mission area. South Korean warships have used foreign systems such as Goalkeeper, a Dutch system developed by Thales, and Phalanx, a U.S. system developed by Raytheon.