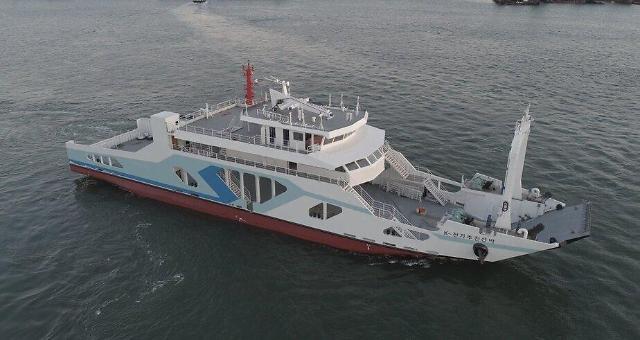 SEOUL -- A 420-ton electric propulsion passenger ship capable of transporting cars and cargo together made its debut in South Korea. It is the country's first eco-friendly ship installed with a vehicle-type mobile battery pack system to maximize power supply efficiency. There is no need to install high voltage charging facilities at ports.

The vessel was launched in a ceremony on March 4 in the southwestern port city of Mokpo, which has been selected for a five-year government project that began in 2020 to develop electric propulsion ships with the state-funded Korea Research Institute of Ships and Ocean Engineering (KRISO), private companies, research institutes, and university teams.

Technology stability of the electric propulsion ship will be secured through more than a year of empirical operation, the Mokpo city government said in a statement. The ship, which is 49 meters long and can carry 125 passengers and 20 vehicles, is to operate on coastal sea routes between Mokpo and nearby islands.

KRISO adopted the vehicle-type mobile battery pack system to cope with South Korea's complicated coastal environment. Detailed information such as the structure of the vessel's power system was not disclosed. Normally electrical propulsion is used in small vessels but shipping companies are adopting the system for large vessels to comply with tightened greenhouse gas regulations.

KRISO aims to develop ammonia mixed fuel technology for ships. In January 2021, the institute's hybrid electric-powered car ferry obtained approval in principle from an Italian classification society. It is equipped with an electric propulsion battery that generates 6,000KW of power and can carry more than 800 passengers and 300 containers.