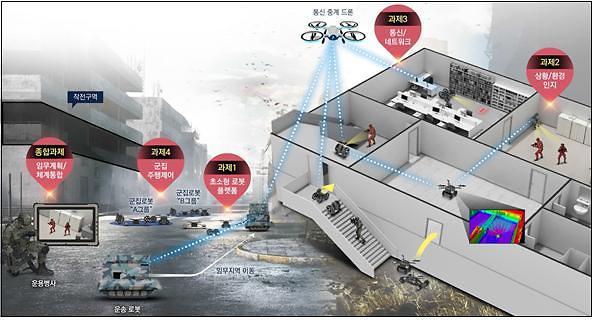 SEOUL -- A consortium led by LIG Nex1, a major defense company in South Korea, has embarked on a five-year research project to develop technologies for the control of micro-sized insect spy robots that operate in clusters like ants and bees. The tiny robots can be utilized in reconnaissance missions by collaborating with manned and unmanned equipment such as military drones and patrol robots.

Micro-sized robots inspired by insects are being researched globally, especially in the military sector, because they are very small and can be disguised as actual insects to delude human guards. Insect robots mimic the behavior of a cluster of insects to create a swarm or to carry out individual tasks such as reconnaissance and information gathering. The most common form of clustered robot control is drones flying in formations to create spectacular light patterns in the sky.

The project that would cost some 28.8 billion won ($23.5 million) is designed to research control and management technologies for robots with mechanisms that mimic micro-sized living organisms. KRIT said that cluster robot technology can be applied to civil industrial sectors.

Technologies to be researched are related to sensor modules, recognition, autonomous control technology, and operation management. "We aim to upgrade the degree of technological completion to the limit so that South Korea can become the leader in the global micro-sized insect robot industry and use the top-notch technology for the military," Cho Kyu-jin, an SNU professor of soft robotics, was quoted as saying.

Cho admitted that there are still many technical challenges to solve for the military use of micro-sized insect spy robots. An SNU robot research center has worked with LIG Nex1 to develop biomimetic reconnaissance robots.