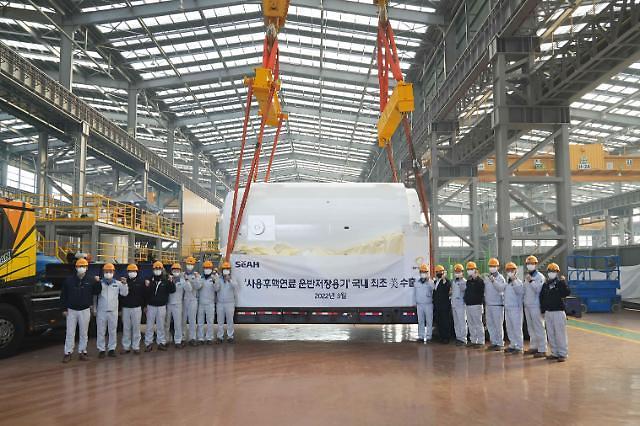 Starting with its first delivery, SeAH Besteel said it would actively respond to the rapidly increasing demand in domestic and global nuclear dismantling markets. "Through the first delivery of spent nuclear fuel transport and storage casks, our manufacturing technology has been recognized in the U.S. nuclear power plant market, which requires strict delivery standards," an unnamed SeAH Besteel official said in a statement on March 7.

As Orano's partner for the development of high-quality casks, the South Korean company verified its technology by participating in a domestic project to provide casks to Korea Hydro & Nuclear Power (KHNP), the state-run operator of nuclear power plants.

President Moon Jae-in has unveiled a new energy roadmap to replace fossil-fueled power plants with clean and renewable energy sources. The life cycle of existing reactors will not be extended to decrease the number of nuclear power plants from 24 to 14 in 2038. However, South Korea has no experience in dismantling nuclear power plants.

Government data released in 2018 showed that South Korea needs a total cost of some 100.6 trillion won to seal reactors and manage spent fuel and radioactive waste. However, there has been no clear answer from policymakers to address concerns about nuclear waste and the management of spent fuel, which have been a stringent issue because Washington refused to revise a 2015 accord that has effectively restricted the development of reprocessing facilities to acquire enriched uranium as fuel.