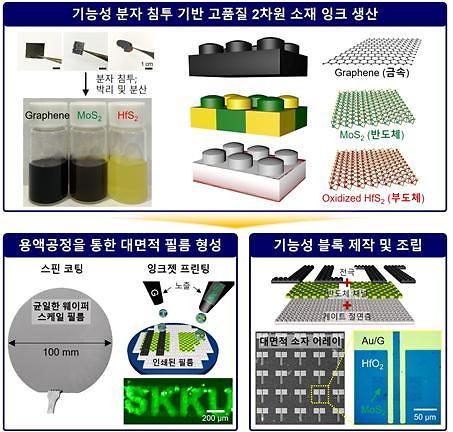 Currently, semiconductors use wafers sliced off a pure silicon ingot. Microscopic electronic components are installed on circuit boards drawn on the wafer. As semiconductors require more circuit boards and components on a single chip for high-performance output, chipmakers are striving to jam everything in chip wafers that are becoming smaller and smaller to fit the size of wearable devices and tiny smart devices such as smart sensors.

New semiconductors based on two-dimensional nanomaterials are widely researched. Nanomaterials are normally obtained by repeatedly adhering and removing a sheet of sticky tape onto mineral ore. However, the quality of the obtained nanomaterial is not even and the work process is not very efficient. The surface area of the produced material was only about a few hundred square nanometers.

The National Research Foundation (NRF) of Korea said in a statement on March 8 that researchers at Seoul's Sungkyunkwan University have developed a technique to produce a 2D ink-based high-performance low-voltage chip that can be put together like toy blocks to create a larger piece. Researchers succeeded in creating a large-area semiconductor with a diameter of 10 centimeters (3.9 inches) using the ink-based material.

Researchers induced an electrochemical effect by permeating functional molecules into minerals and widening the distance between atomic layers of the target mineral. The mineral was submerged in an alcoholic catalyst solution and was struck by weak ultrasonic waves. Nanomaterials were separated from the mineral in a form of a nanosheet. Blocks of the material were put together to create wafer-level nanomaterial films with an even thickness.

NRF said that the 2D ink-based semiconductor material will have the effect of reducing production time and manufacturing costs. The ink-based chips also have great electric characteristics and they would be useful in industries related to the Fourth Industrial Revolution including artificial intelligence.