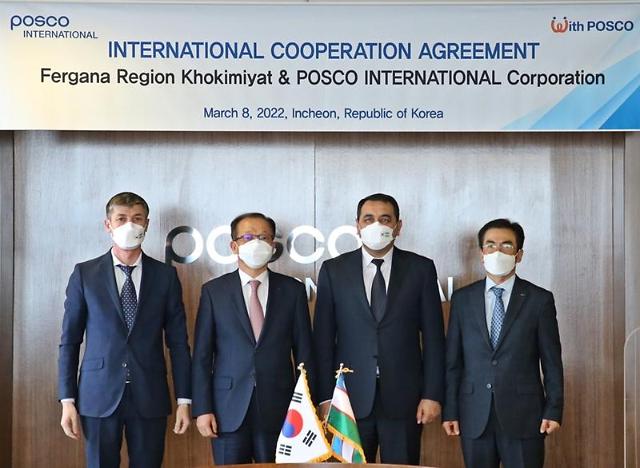 SEOUL -- POSCO International, a trading arm of South Korea's steel group POSCO, disclosed a blueprint to promote a sustainable cotton industry ecosystem in Uzbekistan, a Central Asian nation and former Soviet republic, through vertical integration from cultivation to the manufacturing of finished products.

"Central Asia is one of our strategic areas," POSCO International CEO Ju Si-bo said on March 8 after he signed a memorandum of agreement on the establishment of a raw cotton cluster with Governor Khayrullo Bozarov of Ferghana Region in eastern Uzbekistan at the company's head office in the eastern port city of Incheon.

Cotton is Uzbekistan's main cash crop. President Shavkat Mirziyoyev has pushed for reforms to modernize the country’s agricultural economic model and eradicate child labor and forced labor in the annual cotton harvest that was previously prevalent. POSCO International has grown into the largest cotton production company in Uzbekistan since the establishment of its first spinning plant in 1996.

Uzbekistan's cotton cluster project is aimed at improving the productivity and quality of raw cotton with processing companies directly participating in cultivation. "We will move away from simple processing and create a sustainable industrial ecosystem through vertical integration from cultivation to the manufacturing of finished products," Ju said.

"POSCO International is a company that has grown with Uzbekistan's cotton industry and is like a native Uzbek company," the Ferghana governor said, requesting investment in food processing and the creation of a business center. "I hope it will serve as an opportunity to evolve Uzbekistan's raw cotton industry through continuous investment and extraordinary vision."