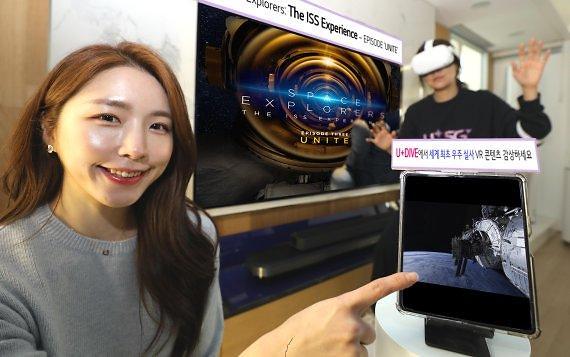 SEOUL -- An international 5G extended reality alliance led by LG Uplus, a mobile carrier in South Korea, will release the third episode of "Space Explorer: The ISS Experience," an epic four-part immersive series showing a spacewalk shot in real space at a space station. Users can see how astronauts carry out missions at a space station.

Using the 360-degree VR camera developed by Felix & Paul Studios, a Canadian realistic content production company in the XR alliance, viewers can see astronauts carrying out various missions at the ISS. The camera, equipped with a specialized lens that withstands ultra-low and high temperatures, operates properly from minus 156 degrees Celsius to 121 degrees Celsius.

The service can be accessed for free using an XR platform called "U+Dive." Users can enjoy the service using a smartphone without wearing a VR headset. "We are glad to show you the real space outside the ISS filmed with the world's first 3D 360-degree VR camera through the XR Alliance," LGU+'s XR service head Choi Yoon-ho said in a statement on March 10.

The XR Alliance has 11 companies in seven regions including Japan's KDDI, China Telecom and Trigger, an AR specialist in the U.S. The alliance selects content to be produced through regular meetings and expands the scope of realistic content to various sectors such as performances and documentaries of sports stars while making new attempts by implementing two or more technologies at the same time or merging new technologies.

The first episode of Space Explorer features the joy, wonder and danger of living in space. The second episode shows astronauts growing plants, the sun's heat and meals in a weightless state.