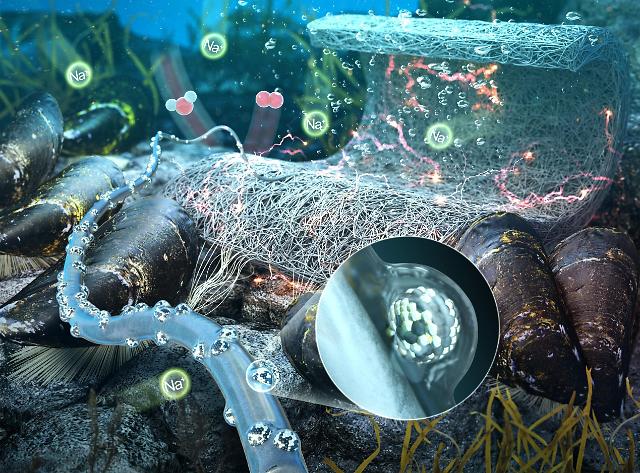 
SEOUL -- South Korean researchers have developed a high polymer binder material that helps catalysts stick to electrodes of seawater batteries to improve performance. The adhesive material was designed after sticky protein, produced by mussels, that sticks to various surfaces including rocks, boats and ropes.

Normally, polyvinylidene difluoride (PVDF), a highly non-reactive thermal plastic fluoropolymer, is used as a binder for catalysts but PVDF's performance is greatly reduced in seawater. When catalysts are not properly adhered to the current collector, the corrosion of carbon materials takes place due to overvoltage.

The Ulsan National Institute of Science and Technology (UNIST) said that its research team has developed an underwater binder that mimics the protein-based glue produced by mussels. Researchers found that a seawater battery using the newly-developed binder showed up to 60 percent less occurrence of overvoltage. The performance of electrodes was improved by about 400 percent.

The institute said that the biomimetic binder protects current collectors from corrosion and catalysts from breaking apart. "This research will contribute to the early commercialization of seawater batteries and other aqueous metal-air batteries," UNIST researcher Choi Ji-eun said in a statement on March 14.