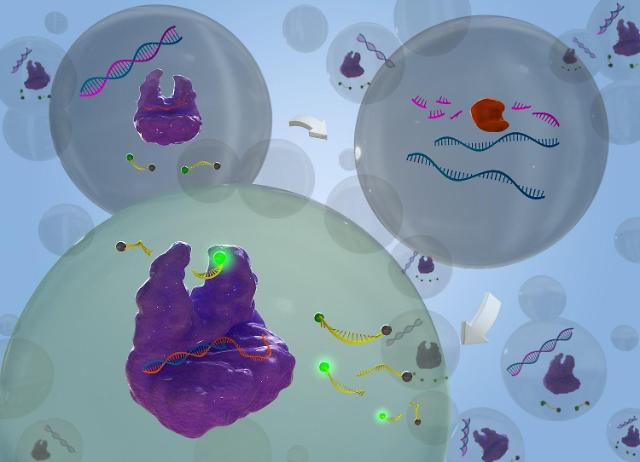 SEOUL -- Using genetic scissors technology, South Korean researchers have developed a technique capable of detecting the activation of a specific family of endonuclease enzymes that can cause DNA instability. The genetic technique will contribute to the development of the cure for acquired immunodeficiency syndrome, a life-threatening disease commonly known as AIDS.

Ribonuclease H (RNase H) is a family of endonuclease enzymes that cleave hydrolyzes, the phosphodiester bonds of RNA which is hybridized to DNA. RNase H exists in nearly all organisms from bacteria to humans. Researchers think RNase H plays a key role in DNA replication, DNA repair, and RNA transcription.

The activity of enzymes in the reverse transcription of HIV-1 and hepatitis B virus constitutes an essential domain of reverse transcriptase. Because of its characteristics, RNase H is regarded as an important target for the development of antiviral medicine. Currently, the activation of RNase H can be detected using a high-performance liquid chromatography technique but such a method takes a long time to produce results.

The Korea Advanced Institute of Science & Technology (KAIST) said that its research team has used the collateral cleavage activity of CRISPER-Cas12a, a genetic scissors system, to accurately detect the activation of RNase H in less than 60 minutes. Researchers said that because the activity of enzymes is involved in the proliferation of AIDS cells, this research can help find the cure for incurable diseases.

"Because this technique uses CRISPER-Cas12a system's collateral cleavage activity to accurately detect RNase H, it can be utilized for the development of antiviral target drugs," KAIST researcher Park Hyun-gyu said in a statement on March 14.