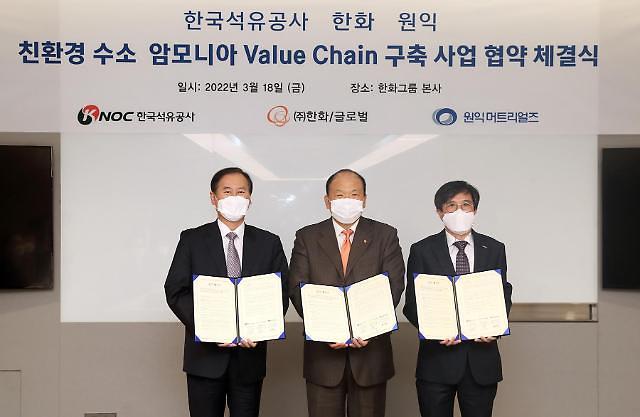 SEOUL -- South Korea's national oil and gas company joined hands with two domestic companies to establish a hydrogen-ammonia value chain from the establishment of storage infrastructure to the production and supply of hydrogen through ammonia cracking.

Ammonia is produced through a chemical reaction between hydrogen and nitrogen at high pressure and temperatures. The decarbonization of ammonia production is an integral part of the global transition to net-zero emissions as the production, storage, transportation and distribution of ammonia is less complicated than other ordinary fossil fuels.

Ammonia can be used directly as a fuel in high-temperature fuel cells, internal combustion engines and gas turbines. Ammonia cracking is the process of decomposing ammonia into hydrogen and nitrogen over a catalyst to increases the range of possibilities for utilizing ammonia as an energy vector.

Korea National Oil Corporation (KNOC), which has infrastructure for storing, stockpiling and supplying hydrogen by using oil reserve depots, has signed a business cooperation agreement with Hanwha Corporation and Wonik Materials. "It will be a good opportunity to share and cooperate with each company's experiences and know-how," KNOC CEO Kim Dong-sub.

Wonik Materials, a specialty gas manufacturer in South Korea, has technologies for designing an ammonia cracking system. Hanwha Corp. has used ammonia to produce nitric acid, a raw material for gunpowder. The two companies have already been involved in a project to establish an ammonia supply system in a demonstration area in the central city of Chungju.

KNOC is involved in a project to build a hub terminal that stores overseas-produced hydrogen and ammonia and supplies them to power plants or hydrogen charging stations. Ammonia fuel generation is considered an ideal eco-friendly model because it does not emit any carbon dioxide, but the combustion speed of ammonia as a fuel for power generation is lower than natural gas.

In November 2021, a government task force was launched to speed up the commercialization of technologies using hydrogen and ammonia for power generation. Gas turbines have become one of the most widely-used power generating technologies because they reduce the emission of fine dust and other air pollutants.