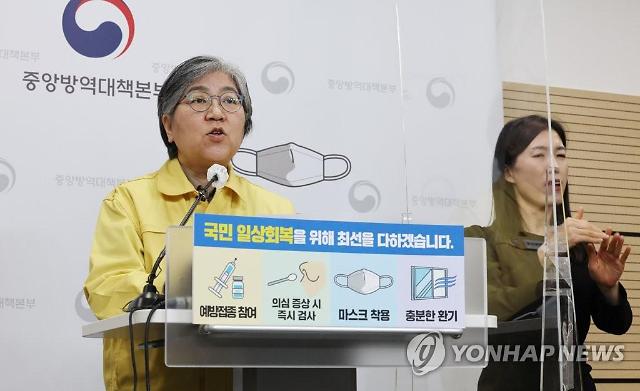 
SEOUL -- South Korea's state health center has signed a pre-purchase contract for 10 million doses of a COVID-19 vaccine candidate codenamed GBP510 being developed by SK Bioscience, which aims to supply GBP510 from the second half of 2022 and obtain emergency use approval from the World Health Organization.

GBP510 is South Korea's first vaccine candidate to receive state permission for Phase 3 clinical trials and the second in the world to demonstrate its effectiveness in comparison with licensed vaccines. It is a recombinant vaccine that injects surface antigen protein of the coronavirus made using genetic recombination technology to induce an immune response.

The vaccine has been developed to enhance immune effects by generating antibodies by utilizing techniques that increase antigen exposure. "The government signed a pre-purchase contract with SK Bioscience for 10 million doses," Jeong Eun-kyong, head of the Korea Disease Control and Prevention Agency (KDCA), a state anti-epidemic center, said in a press briefing on March 21.

Jeong said that GBP510 would be provided as a comparative vaccine for the subsequent development of vaccines by other companies in South Korea. A comparative approach was adopted as it is difficult to proceed with clinical trials using the existing method that requires tens of thousands of test subjects to evaluate the validity and safety of test vaccines.

South Korean health officials said earlier that GBP510 showed sufficient safety and immunogenicity, no special side effects have been reported. The vaccine can be refrigerated and distributed at a temperature of 2~8 degrees Celsius.

The development of GBP510 has been funded by the Coalition for Epidemic Preparedness Innovations (CEPI), an international foundation that finances vaccine research projects. The project involves the Institute for Protein Design at the University of Washington in Seattle.

CEPI has launched a Wave 2 project to discover new vaccines with money from the Bill & Melinda Gates Foundation. The project is aimed at finding universal and economical candidate materials that are easy to store and improve the number of inoculations, productivity and immune response. When development makes progress, SK Bioscience would carry out research into "booster shots," which are additionally inoculated with vaccines, and multi-vaccines that prevent more than one type of virus.