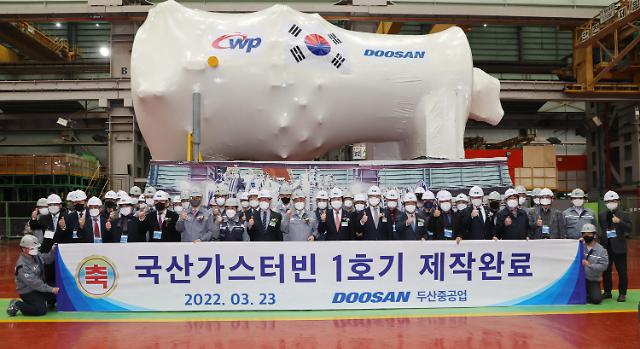 SEOUL -- After nearly two years of in-house testing, South Korea's first homemade gas turbine capable of providing electricity to some 250,000 houses was rolled out for field operation in a high-profile ceremony that marked a turning point in the country's power industry seeking to secure independent technologies and energy security.

The 270 megawatt-class turbine using liquefied natural gas will go through demonstration by 2025 at a combined heat and power station to be built in Gimpo, the western satellite city of Seoul. The cogeneration plant generates electricity first with an LNG gas turbine and uses waste heat to drive a steam turbine.

"This gas turbine manufactured with our technology is a symbolic model that can serve as a new growth engine for the manufacturing industry," Deputy Governor Ha Byeong-pil of South Gyeongsang Province said in an event on March 23 at the plant of Doosan Heavy Industries & Construction, a key player in the domestic power industry, in the southern city of Changwon.

Gas turbines, which can utilize a variety of fuels, including natural gas, fuel oils, synthetic fuels and hydrogen, have become one of the most widely-used power generating technologies. Policymakers have described independence in gas turbine technology as an important task in terms of energy security because all 149 gas turbines operating at power plants in South Korea were from overseas companies.

In 2020, South Korea launched a task force of private companies, state bodies and research institutes to push for the early commercialization of diverse gas turbines for power generation, based on a prototype developed by Doosan Heavy, because foreign companies are reluctant to transfer technology.
© Aju Business Daily & www.ajunews.com Copyright: All materials on this site may not be reproduced, distributed, transmitted, displayed, published or broadcast without the authorization from the Aju News Corporation.