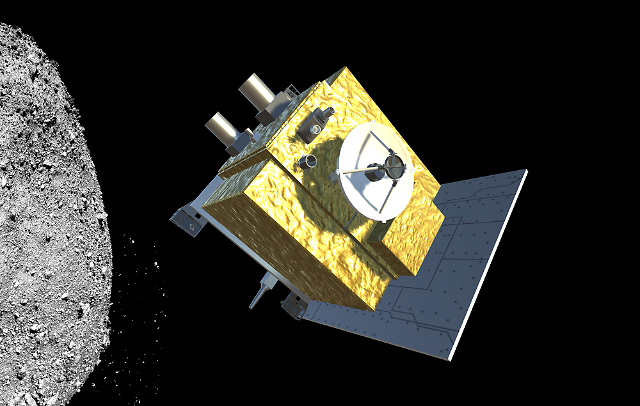 [Courtesy of the Korea Astronomy and Space Science Institute ]

SEOUL -- Three state-run research bodies have joined hands to push for South Korea's first asteroid exploration mission in April 2029 when Apophis makes a close approach to Earth. A homemade probe will be deployed into the orbit of Apophis for observation and scientific research to accumulate space technologies.

The Ministry of Science and ICT has applied for a preliminary feasibility study for the Apophis exploration mission involving the Korea Astronomy and Space Science Institute (KASI), the Korea Aerospace Research Institute (KARI) and the Agency for Defense Development (ADD).

Apophis with an estimated diameter of 370 meters will come no closer than 31,600 kilometers (19,600 miles) above Earth's surface. "The Apophis exploration is the best opportunity to explore an asteroid and make a deep space navigation independently by combining our space technology capabilities accumulated so far," KASI head Park Young-Deuk said in a statement on March 24.

A KASI timetable showed that a probe weighing 534 kilograms should be launched in October 2027. It will sail for more than 12 months to approach Apophis for a two-month preliminary exploration. From April 14, 2019, when Apophis makes its closest known approach to Earth, the probe would conduct precise observation.

KASI is responsible for the production of a payload and scientific research, while KARI is in charge of the probe and its projectile as well as ground station work. ADD will develop a kick motor that will directly deploy a probe into the orbit of Apophis. The kick motor will be placed on top of a three-stage homemade projectile.

The payload would include a multi-wavelength polarization camera capable of collecting polarized light and a laser altimeter for the observation and precise tracking of asteroid surfaces and topographic changes according to the gravitational interaction between Earth and Apophis.

When Apophis approaches in 2029, gravity is expected to change the asteroid's orbit diameter and distort its rotation axis. South Korean researchers hope to study such natural experiments and accumulate technologies necessary for the scientific understanding of potentially hazardous asteroids.

Through the exploration of Apophis, KASI said South Korea can secure rendezvous technology and help accumulate space technologies such as docking, space waste disposal, and in-orbit services. The project would also help researchers verify technologies being developed for lunar exploration. South Korea aims to launch a lunar orbiter and develop a lunar lander weighing more than 1.5 tons that would carry out scientific research on the surface of the moon in the 2030s.