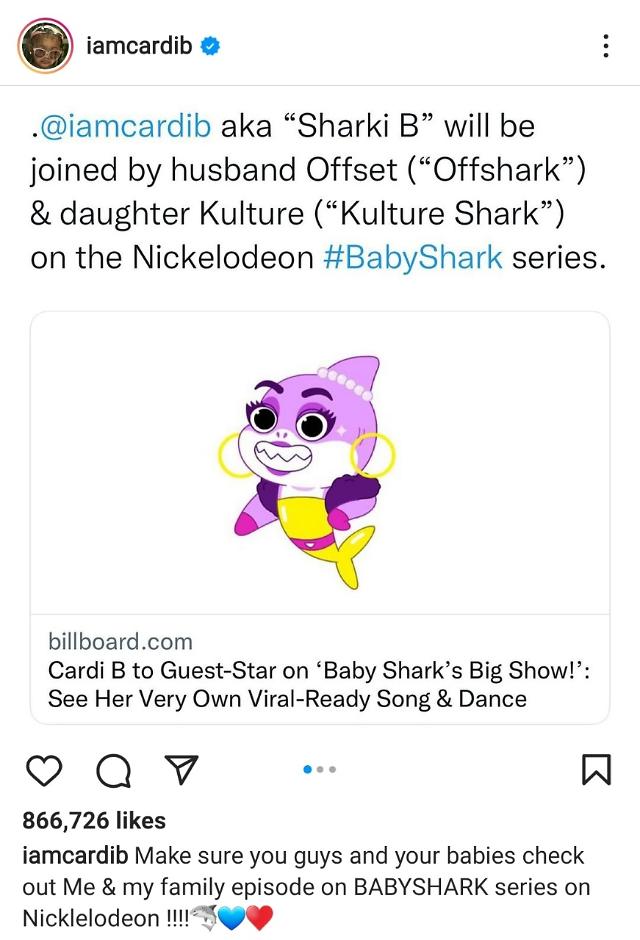 SEOUL -- Cardi B, an American rapper and songwriter, will guest star in an episode of Baby Shark’s Big Show!, an animated children's television series based on Pinkfong's "Baby Shark" brand, that will be released on April 15. The show has been broadcast in the United States, Britain, Italy and Australia.

The internet celebrity will voice the role of a new character "Sharki B" in the show co-produced by Nickelodeon Animation Studio, an American animation studio owned by Paramount Global, and South Korea's Pink Pong Company, which produced "Baby Shark," a catchy cartoon song that depicts a story about a family of great white sharks with colorful visuals and a catchy melody.

The original version of Baby Shark, uploaded in late 2015, made a phenomenal hit worldwide and has tens of versions in many languages. The "Baby Shark Dance" video uploaded in 2016 is now one of the most-watched on YouTube.

"Make sure you guys and your babies check out Me & my family episode on BABYSHARK series on Nicklelodeon," Cardi B said in her Instagram post. The rapper will play the character with his real voice for her cameo in the episode, which depicts an adventure that takes place when Baby Shark and William run into Sharki B and her family ahead of her concert, showing colorful costumes and unconventional performances with a pleasant and confident personality.

The main theme song will be released on April 8, featuring Cardi B's husband Offset as Offshark, and their three-year-old daughter Kulture as Kulture Shark.
© Aju Business Daily & www.ajunews.com Copyright: All materials on this site may not be reproduced, distributed, transmitted, displayed, published or broadcast without the authorization from the Aju News Corporation.