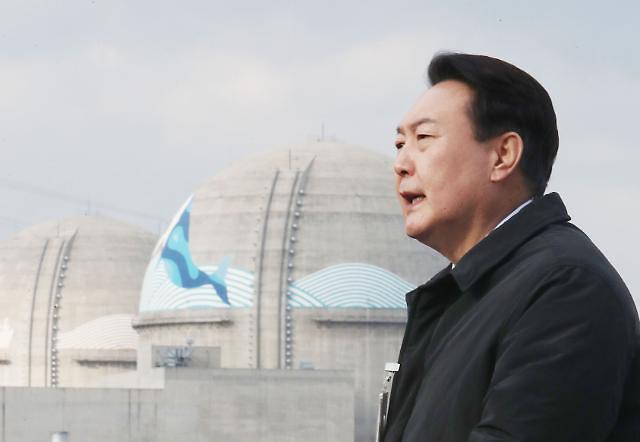 
SEOUL -- With weeks to go before taking office, South Korea's next president Yoon Suk-yeol is making an early push to revitalize South Korea's struggling nuclear power industry, risking a strained relationship with his predecessor who has prioritized the establishment of infrastructure for renewable energy sources such as solar panels and wind farms, as well as a hydrogen economy during his five-year term to achieve net-zero carbon dioxide emissions by 2050.

Much of Yoon's pre-inauguration work rattled along with determination and sometimes intransigence shown by his presidential transition team that indisposed the supporters of Moon Jae-in, the incumbent president who is to walk out of the presidential office on May 10, and fanned social debate over the properness of any drastic modifications to South Korea's long-term energy roadmap.

Moon's Democratic Party has rapped out a complaint at what appeared to be a challenging approach taken by Yoon's team of associates and advisers who want quick prior steps for smooth policy implementation in divisive issues such as South Korea's nuclear power industry which has seen an irrecoverable slump due to Moon's so-called "nuclear-exit" policy.

Yoon has pledged to actively revitalize the nuclear power industry, support technology exports, and develop next-generation reactors, insisting that nuclear power plants are an essential factor in restoring South Korea's industrial competitiveness. "Among what the current government is pushing, we will continue to manage the tasks that need to be continued, and boldly push for change and reform in areas that need to make new changes," he told reporters on March 10.

State prosecutors launched a raid on March 25 into the Ministry of Trade, Industry and Energy to secure evidence on allegations that the ministry has forced the resignation of top officials at state-controlled organizations for showing a negative attitude towards Moon's energy policy.

While serving as prosecutor general, Yoon had been at odds with Moon's men. The antagonistic relationship with Moon drew unexpected support from the conservative circle. Yoon tendered his resignation in March 2021 and jumped into the presidential race three months later. As a presidential candidate, Yoon vowed to dig into what he called "deep-rooted evils" in the Moon administration.

Yoon's team has urged policymakers at the ministry to work out a new energy roadmap and quick solutions for resuming the suspended construction of nuclear power plants and restoring a nuclear ecosystem.

The raid by prosecutors came a day after Yoon's People Power Party hosted an energy forum where Chung Bum-jin, a Kyung Hee University professor of nuclear engineering, and some other experts advocated the use of nuclear power as a base power source, insisting Moon's policy lacked a practical technology roadmap for renewable energy to achieve net-zero carbon emissions by 2050 by ignoring the role of nuclear power plants.

A fruitless study on the processing of spent nuclear fuel such as pyroprocessing sparked a never-ending debate over how long taxpayers' money should be spent on acquiring unviable technologies. Pyroprocessing is an unverified technology that has been considered largely proliferation-resistant since the product is thermally and radioactively far too hot to use for a weapon.

As a nuclear accord between Washington and Seoul effectively restricts the development of reprocessing facilities to acquire enriched uranium as fuel, South Korea has conducted research into pyroprocessing. However, there has been no visible progress in research, prompting the Seoul government to push it to the corner.

Used nuclear fuel is kept in onsite interim storage facilities. The storage consists of two phases: wet storage and dry storage. Spent fuel rods are first kept in storage pools of water, which provide cooling and shielding against radiation. After 7 to 10 years in wet storage, they can be transferred to dry storage such as concrete canisters, modular air-cooled canister storage (MACSTOR) units and dry storage containers.

Nuclear power plant operators want a quick solution to piles of spent fuel rods. But there has been no clear answer from policymakers to address concerns about the management of spent fuel, which has been a stringent issue due to tight U.S. restrictions. Washington has insisted that wider concessions on reprocessing could complicate efforts to denuclearize the Korean peninsula. South Korea has been on watch by the nonproliferation community because of its covert nuclear program in the 1970s.