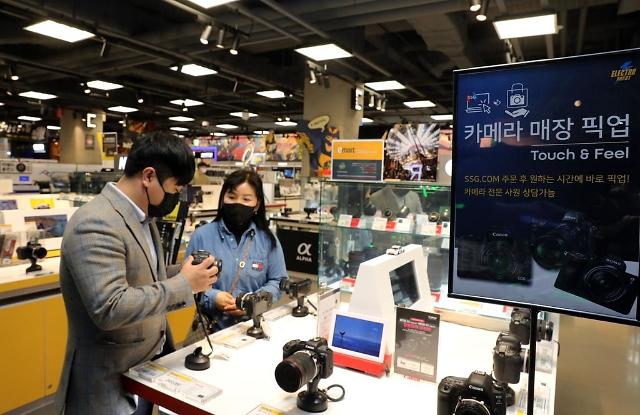 In December 2021, Emart has launched a pilot service to monitor the market reaction for the special camera product delivery service by opening project stores at four megastores in Seoul and its nearby cities. Customers who ordered items from Shinsegae's online mall could pick up their orders at selected Emart stores. The project stores had sommelier-like specialists who helped customers select the right gear and find the perfect settings.

E-mart said in a statement that the mega-mart franchise will open 10 more stores across the country to attract camera lovers. Emart said that the project stores saw their sales increase by about nine times compared to other stores during the test period of about three months. At the online-to-offline (O2O) store, customers can also compare and try 70 different types of cameras and related products such as lenses and filters at offline stores.

Cameras are high involvement products that consumers engage in a series of considerations regarding the design, price, feature, and versatility of the product before purchasing. Emart said that the company decided to beef up its O2O camera service because the market demands for cameras have increased due to the rising popularity of self-created social media video content. Emart said that its total camera sales increased by 10 percent in 2021 from a year ago. Sales of mirrorless cameras, types of cameras that are smaller and lighter than professional digital single-lens reflex (DSLR) cameras, increased by 15 percent.

"Because Emart stores are accessible to many customers, we launched the one-stop service by combining advantages of both online and offline platforms," E-mart official Kim Chea-eon told Aju Business Daily on March 28.