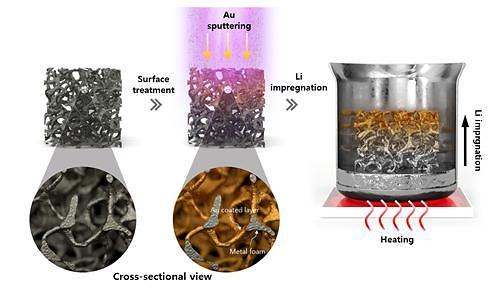 
SEOUL -- For the first time in the world, South Korea's defense technology development agency has developed a high-performance anode technology for thermal batteries used in precision-guided weapon munitions. The three-dimension structured anode is easier to make and can beef up the capacity of thermal batteries by more than 200 percent.

The Agency for Defense Development (ADD) said in a statement on March 29 that its research team has developed a lithium-impregnated metal foam anode (LIMFA) by melting pure lithium to impregnate a porous metal foam material to reduce production costs and time. The high-performance anode increased the capacity of thermal batteries.

ADD said the new anode technology will be used for the development of thermal batteries for various precision-guided munitions including guided missiles and torpedoes. Researchers also hope to apply the technology to other civil electronics sectors such as electric vehicles and mobile devices.

South Korea's precision-guided munitions are basically winged artillery shells that can accurately glide to their targets from high altitudes. Because the winged shell does not have an external power source, it uses shock-activated thermal batteries activated by physical shock created during its launch. In early March, ADD developed a shock-activated high-performance thermal battery for winged shells.

The Gliding Guided Artillery Munition (GGAM) jointly developed by ADD and South Korean munitions maker Poongsan can travel up to 100 kilometers (62 miles) to precisely reach its destination. The development of winged shells was launched in 2014 and developers are currently researching techniques to increase the shell's flying distance to more than 100 kilometers.