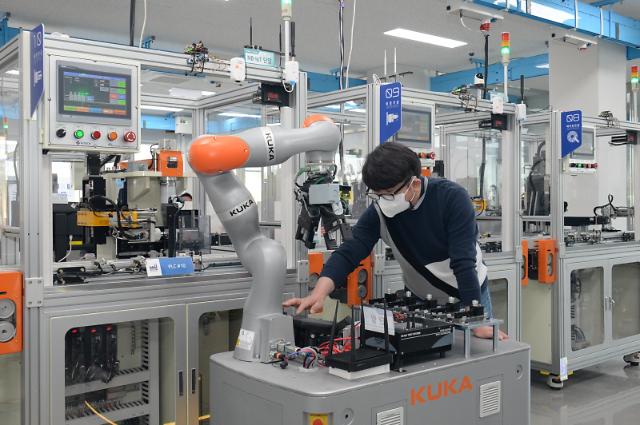 SEOUL -- Researchers from a government-funded institute have collaborated with their counterparts from Finland's University of Oulu to establish an ultra-low latency remote control tower network system for smart factories using Finland's 5G test network and South Korea's test backbone internet network. The super-fast network connected a control tower and a smart factory that are more than 10,000 kilometers (6,213 miles) away.

Establishing an internet connection between two locations that are very far away using a combination of cable and wireless networks is not very difficult. However, it is extremely difficult to maintain a low latency rate to ensure an almost immediate response from the other side. Latency is a vital aspect in the field of long-distance remote control systems because an untimed maloperation of equipment could cause a disastrous accident.

The Electronics and Telecommunications Research Institute (ETRI) said that a joint team of researchers from ETRI and the University of Oulu successfully demonstrated the operation of an industrial internet of things (IoT) service that was used to control a smart farm in Gyeongsan some 250 kilometers southeast of Seoul from a control tower in Finland's Oulu.

ETRI said that the research team in Oulu was able to continuously monitor and operate equipment in the Gyeongsan smart farm while maintaining a latency of faster than 0.3 seconds. The super-long distance network consisted of Oulu's 5G test network, continental cable networks, and the Korea Advanced Research Network (KOREN), a super-fast internet backbone network used for testing various network technologies.

Based on the long-distance network connection technology, remote control towers can be set up anywhere in the world to operate factories and facilities that are located on the opposite side of the globe.

"We hope to revitalize the manufacturing industry that was struck hard by a coronavirus pandemic by being able to remotely operate a smart factory from home or any other country," ETRI researcher Kim Il-kyu said in a statement on March 30.