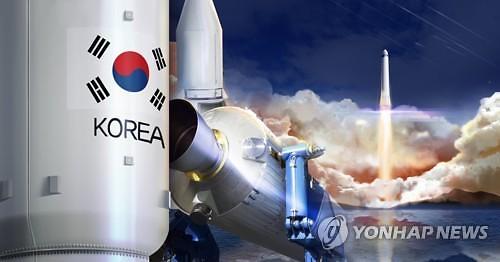 
SEOUL -- South Korea aims to put a small dummy satellite into low orbit by 2024 using a solid-propellant space rocket after its first test launch produced satisfactory results in verifying the performance of a large solid-fuel propulsion system and other core technologies, which are crucial for the operation of small spy satellites.

The first test launch of a homemade solid-propellant space launch vehicle on March 30 was successful, the Defense Ministry said, adding it would boost the development of projectiles capable of carrying small military satellites or microsatellites into low orbit. The test launch was watched by Defense Minister Suh Wook at a test site run by the Agency for Defense Development (ADD), a state defense technology development body.

As part of a military program to develop technologies on low-orbit satellites operating at an altitude of less than 500 kilometers, the test launch verified the performance of a large solid propulsion engine and other technologies such as upper stage posture control technology.

The Defense Ministry emphasized the close relationship between civilian and military programs to develop a space launch vehicle using a solid propulsion engine, saying core technologies will be transferred to private companies in the aerospace industry. However, the ministry's statement contained implicative semantics about an arms race with North Korea.

The ministry described the successful test launch of a solid-propellant space launch vehicle as "an important milestone in strengthening South Korea's defense capabilities in the field of independent space-based surveillance and reconnaissance" at a time when North Korea breached its moratorium by launching an intercontinental ballistic missile on March 24.

The disclosure of South Korea's test launch was seen as a calculated action amid an intensifying inter-Korean missile race that has seen the test-firing of new missile systems one after another from submarine-launched ballistic missiles to supersonic cruise missiles. South Korea has stepped up the development of solid propellants for missiles and rockets.

In a new program that showed confidence in technology development, South Korea will push for the development of a hybrid engine using solid and liquid fuels together that can increase the weight of space launch vehicles in a shorter period of time. A hybrid engine can operate space launch vehicles more flexibly and quickly depending on missions and purposes and significantly reduce the time required to advance technology.

The development of a hybrid rocket motor that uses one propellant in solid form and the other in liquid form was proposed at a high-level defense technology committee on February 22 that drew vice-ministerial level government officials and representatives from major government-funded research institutes, and private experts. The hybrid system can help South Korea secure technology that can put multiple satellites into different orbits with one launch vehicle.

The Defense Acquisition Program Administration (DAPA) has disclosed a project to establish a fleet of ultra-small spy satellites that would be used to quickly detect asymmetric threats from North Korea's nuclear weapons and missiles. The combination of a military reconnaissance satellite and ultra-small spy satellites would help South Korea enhance its early warning capabilities and quickly monitor signs of provocations.