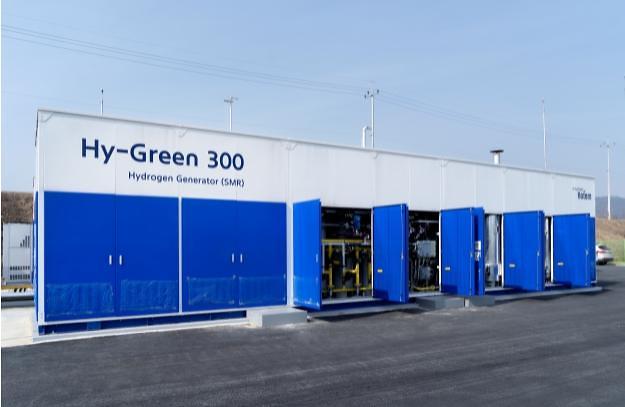 
SEOUL -- Hyundai Rotem, a subsidiary of South Korea's Hyundai auto group, has delivered a hydrogen extractor to a fusion charging station that produces and supplies hydrogen using food biogas. The station can produce up to 640 kilograms of high-purity hydrogen per day.

Hyundai Rotem's extractor is a key component installed at the hydrogen charging station in a special demonstration zone in ChungjuChungju, some 90 kilometers (56 miles) south of Seoul, that opened on March 30. The facility serves as South Korea's first mother station that charges cars and supplies hydrogen to nearby charging stations using tube trailers.

"We completed delivery through thorough process and quality control for the timely operation of South Korea's first hydrogen fusion charging station using biogas," an unnamed Hyundai Rotem official said in a statement on March 31. Hyundai Rotem said its hydrogen extractor with a localization rate of 90 percent is cheaper than foreign products.

Hyundai Rotem said it has conducted an airtight test to check the sealing performance of all pipe connections related to hydrogen production and an internal pressure test to see if they can withstand certain gas pressures.

Biogas is normally produced by anaerobic digestion with anaerobic organisms. A food treatment center in Chungju decomposes food waste with microorganisms in an anaerobic digestive tank to produce biogas containing methane and carbon dioxide. Producing hydrogen with biogas that was previously burned and eliminated can contribute to stabilizing hydrogen prices due to the large effect of reducing greenhouse gases and low production costs.

The wide uptake of using biogas as a renewable energy source has been hindered because of high costs. For sustainable energy transition, the Seoul government has vowed to accelerate the popularization and adoption of biogas by lowering legal hurdles that have hampered the operation of biogas manufacturing.