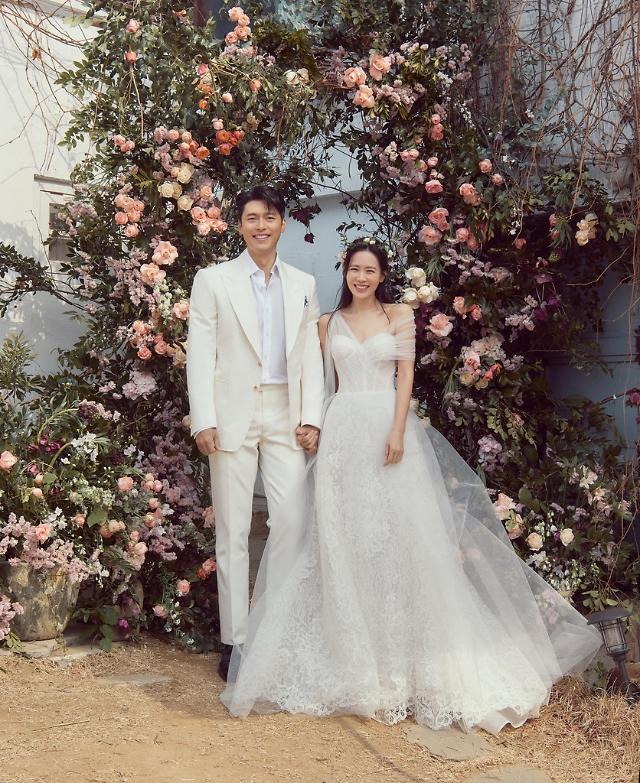 SEOUL -- Popular actor Hyun Bin and actress Son Ye-jin who turned hopeless romance into a beautiful love story in a cable TV drama tied the knot in reality. Through a 2019 drama called "Crash Landing on You," the couple depicted a forbidden love story in North Korea to fascinate global fans including drama lovers in South Korea, China, Japan and Vietnam.

The wedding ceremony of Hyun, 39, and Son, 40, was held at a hotel in eastern Seoul on March 30. The event gained attention as it turned the fabricated relationship in the TV drama into real conjugal love. The ceremony held behind doors was attended by hundreds of selected guests. The event was put under tight security so that even reporters could not enter.

The two celebrities co-starred as lovers in the 2019 romantic comedy drama called "Crash Landing on You." Son played a conglomerate heiress who accidentally crash-landed in North Korea while paragliding due to a sudden storm. She fell in love with a North Korean military officer, played by Hyun, who protected her from being arrested in the repressive country. The hit drama was watched more than 1.7 billion times on Netflix in some 190 countries. It was at the top of Japan's drama rankings for many weeks.

The drama was praised by fans for portraying many different lifestyles of North Koreans. The drama showed the realistic everyday lives of North Koreans including soldiers illegally watching South Korean dramas and high-class Pyongyang residents shopping at a luxurious department store. Other items were depicted realistically to surprise curious drama lovers.

Hyun and Son were caught up in a love scandal during the shooting of the popular drama for fans felt that they had shown real affection for each other. After a series of denials about their relationship, Hyun and Son openly admitted that they are in a relationship in January 2021 and made a surprise announcement of their marriage in February 2022. "We greatly appreciate your congratulations and warm support for the beginning of the two," VAST Entertainment, Hyun's agency said, adding that the 39-year-old will do his best to repay the love received from his fans.

Hyun is a key figure leading Hallyu (the Korean cultural wave) who appeared in various hit TV dramas such as "Secret Garden," "Hyde Jekyll, Me" and "Memories of the Alhambra." The actor has been recognized by drama fans as a handsome gentleman with a deep and soft voice. Hyun is one of the most popular actors among female drama fans. Son gained attention for exuding innocence as a charming actress in melodrama films. She stepped into the spotlight in 2001 through a commercial film for a grapefruit-flavored drink and soon became a mainstream actress by taking the main role in hit melodrama films -- "Lover's Concerto" (2002), and "The Classic" (2003).