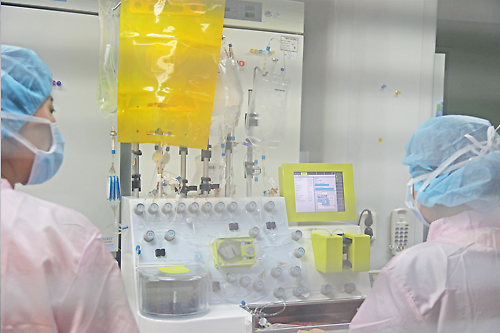 CAR-T cell therapy uses T cells engineered with chimeric antigen receptors (CARs), which are receptor proteins that have been engineered to give immune cells called "T cells" the new ability to target a specific protein. T cells are administered back to the patient after undergoing a mass culture process. Because the therapy activates the patient's immune system, it causes fewer side effects.

A research team led by Kang Hyoung-jin, a professor of pediatric hematology-oncology at Seoul National Universit Hospital, has prepared the entire process for patients with recurrent and refractory acute lymphoblastic leukemia under the age of 25 from the production of CAR-T treatment to administration and treatment.

The first patient to receive CAR-T treatment was a Philadelphia chromosome-positive patient with the highest risk of acute lymphatic leukemia. Lymphocytes were collected from the patient's peripheral blood on February 15 to produce CAR-T treatment in 12 days.

After Kang's CAR-T cell therapy was administered on February 28, the patient developed cytokine release syndrome, a collection of symptoms that can develop as a side effect of certain types of immunotherapy, especially those which involve T-cells. The syndrome occurs when immune cells are activated and release large amounts of cytokines into the body.

However, the patient was discharged from the hospital on Marcy 17 without side effects due to good treatment. In the follow-up bone marrow test, leukemia cells completely disappeared. The hospital would establish a one-stop CAR-T development system to activate the development of CAR-T therapies and clinical research in Soth Korea.

"This study is of great significance in that as a research institution, the hospital has established an integrated system that can produce CAR-T directly, administer it to patients, and then treat and manage it," Kang said in a statement on April 5. "We hope that many new CAR-T candidate materials being developed in South Korea will easily enter clinical trials through our system."