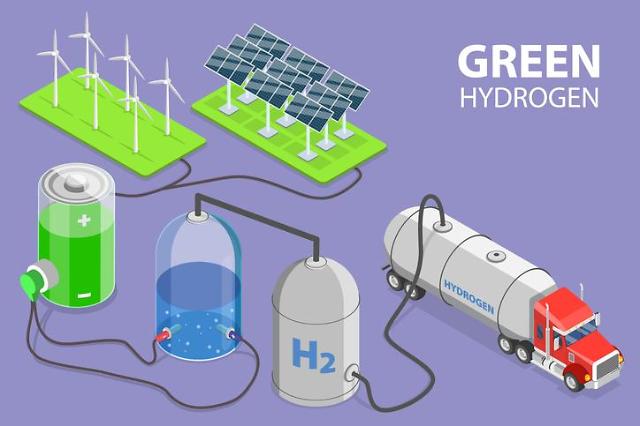 SEOUL -- Researchers have developed a new photoelectrode structure that is used for the production of green hydrogen which does not involve any fossil fuel during its creation process. The new structure allows the electrode to have 400 percent more efficient than current photoelectrodes.

A photoelectrode is a semiconductor that absorbs solar energy to initialize electrochemical transformations. The electrode dissociates water molecules into hydrogen and oxygen. Because the photoelectrode uses sunlight as its main energy source, the semiconductor is perfect for the production of green hydrogen which relies on renewable energy for its production.

Normally, a photoelectrode is created by embedding self-assembled nanopillars in a semiconductor film, without regarding the detailed structure of the stacked material. Such production methods lead to a lowered efficiency of electrical charge collection.

The National Research Foundation of Korea (NRF) said that a joint team involving researchers from NRF, Ajou University, and Stanford University developed a photoelectrode with a dual-textured heterostructure. Researchers said that the new semiconductor has a more surface area used for the production of hydrogen than conventional electrodes. The larger the surface area, the more effective the electrode becomes.

"This research has a meaning as it suggested a new idea to the field of dual-textured heterostructures," Ajou University researcher Cho In-sun said in a statement on April 5. The research paper was published in Chemical Engineering Journal, an international scientific journal.