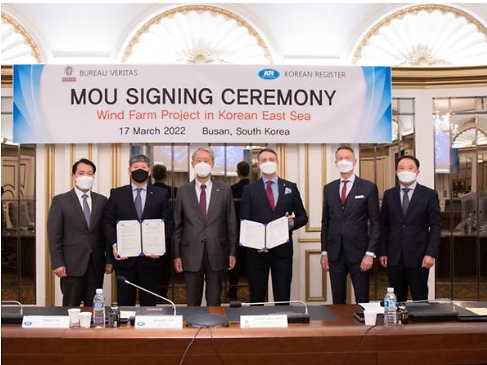 
SEOUL -- Bureau Veritas, a French company specializing in testing, inspection and certification, will cooperate with South Korea's maritime classification society in the certification of floating offshore wind power plants which have drawn foreign and domestic companies seeking to accumulate technologies or prove their prowess through their participation in plenty of green energy projects in Northeast Asia.

Bureau Veritas (BV) and Korean Register (KR) have signed a memorandum of understanding for technical cooperation and mutual support for the certification of floating offshore wind farms that will be built off the southeastern industrial port city of Ulsan.

Based on a public consensus that South Korea should reduce the use of fossil fuels and switch to renewable energy sources, President Moon Jae-in has endorsed a number of projects to build wind farms. However, South Korea's next lead Yoon Suk-yeol has questioned the usefulness of floating wind farms, citing the alleged lack of broad consent from fishermen and citizens.

Ulsan City Mayor Song Cheol-ho Song has called for an end to an unhelpful political argument over South Korea's wind power policy, warning it would cause "anxiety" among domestic and foreign investors. He said that floating offshore wind turbines located in the distant sea would cause fewer environmental problems than fixed wind turbines on land or coast.

Ulsan is at the forefront of South Korea's energy roadmap to expand the capacity of renewable energy up to 60 gigawatts by 2034. The city also aims to build an 84,000-ton green hydrogen production base annually by decomposing seawater with electricity generated by floating offshore wind farms.